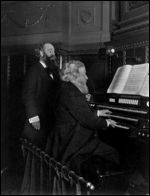 Guilmant was born in Boulogne-sur-Mer. A student of his father, then of the Belgian master Jacques-Nicolas Lemmens, he became an organist and teacher in his place of birth.

In 1871 he was appointed to play the organ regularly at la Trinité church in Paris, and this position he held for 30 years.[1] From then on Guilmant followed a career as a virtuoso; he gave concerts in the United States (the first major French organist to tour that country), and in Canada, as well as in Europe, making especially frequent visits to England. His American achievements included a 1904 series of no fewer than 40 recitals on the largest organ in the world, the St. Louis Exposition Organ, now preserved as the nucleus of Philadelphia's Wanamaker Organ.

With his younger colleague André Pirro, Guilmant published a collection of scores, Archives des Maîtres de l'Orgue (archives of the masters of the organ), a compilation of the compositions of numerous pre-1750 French composers. The collection was printed in ten volumes, the first in 1898 and the last (which Guilmant did not live to finalize) in 1914. Guilmant provided a rather similar survey of organ pieces by foreign composers, publishing l'École classique de l'Orgue (classical school of the organ). These anthologies, despite all the musicological developments which have taken place since Guilmant's own time, remain very valuable sources of early music that is often hard to track down elsewhere.

In 1894 Guilmant founded the Schola Cantorum with Charles Bordes and Vincent d'Indy. He taught there up until his death at his home in Meudon, near Paris, in 1911. In addition, he taught at the Conservatoire de Paris where he succeeded Charles-Marie Widor as organ teacher in 1896.[1] Marcel Dupré was the most celebrated of his many students. Others included Augustin Barié, Joseph-Arthur Bernier, Joseph Bonnet, Alexandre Cellier, Abel Decaux, Gabriel Dupont, Philip Hale, Edgar Henrichsen, and Édouard Mignan.

Guilmant was an accomplished and extremely prolific composer. Unlike Widor, who produced a great deal of music in all the main genres, Guilmant devoted himself almost entirely to works for his own instrument, the organ. His organ output includes: 'Pièces dans différents styles', published in 18 books; 'L'organiste pratique', published in 12 books; Eighteen 'Pièces Nouvelles'; and 'L'Organiste liturgique', published in 10 books. Guilmant's Eight Sonatas were conceived with the Cavaillé-Coll organ of La Trinité in mind, and are therefore symphonic in style and form, taking their place alongside the symphonic organ works of César Franck and the Organ Symphonies of Charles-Marie Widor.

Most of his pieces (and all of the most frequently played ones) are fairly short, but his big symphonic works have had their occasional champions, and they turn up on CD every so often. The Sonate No. 1/Symphonie No. 1 for organ and orchestra, Op. 42, was programmed by Sergei Koussevitzky in the 1930s, but was not heard again until Igor Buketoff revived it for a 1977 live recording with the Butler University Orchestra (note, the composer's name is misspelled "Gilmont" in the source).[2]

This article uses material from the article Alexandre Guilmant from the free encyclopedia Wikipedia and it is licensed under the GNU Free Documentation License.