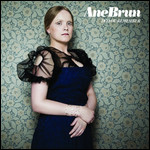 Ane Brun (Norwegian pronunciation: [ɑːnə brʉːn]) (born Ane Brunvoll on 10 March 1976 in Molde, Norway) is a Norwegian songwriter, guitarist, and vocalist. Since 2003 she has recorded eight albums, six of which are studio albums (including a collection of duets) and one live DVD. She has lived in Stockholm, Sweden, since 2001, where she writes, records, and runs her own label (Balloon Ranger Recordings) when not on tour.[1]

After growing up in Molde, Norway, she moved from her home town in 1995 and spent the next few years moving between Barcelona, Oslo and Bergen. In Bergen she began writing her own material while at university (jumping between courses in Spanish, law, and music) as well as making a living working in record shops and bars.

After playing a few minor shows and recording her first demos in Bergen in 1999, she moved to Sweden, first to Uppsala and then to Stockholm in 2001, where she started to take her musical career seriously.

Brun recorded her debut album, Spending Time with Morgan, in 2002 in both Stockholm and back in Uppsala, with engineers and producers Katharina Nuttall, Cécile Grudet and Kim Nelson. It was released on the DetErMine label, which she formed with Ellekari Larsson from the Swedish band The Tiny. The album was released in 11 European countries in 2003 through a licence/distribution deal with V2 Music.[1]

After releasing the first album Brun toured around Europe but soon took some time out. She had been working intensively for two years and felt somewhat burnt out and in need of a break. After a six-month breather she started touring around Europe again and within the next year had her second album ready. A Temporary Dive was again produced by Katharina Nuttall and was released in 2005 throughout Europe, followed by the UK and the US in 2006, and in Japan in 2007. This album took the darker themes of Spending Time With Morgan further, through songs like "The Fight Song" and title track "A Temporary Dive", but there was also space for the lighter "Song No. 6", a duet with Ron Sexsmith.

A Temporary Dive was well received all over the world, picking up good reviews in magazines and newspapers from Time magazine to The Independent. She received award nominations from all over Europe too, and that year took home the Spellemannpris, the Norwegian equivalent of the Grammies, for Best Female Artist.[4]

After enjoying the collaboration on the previous few duets she had recorded, Brun was inspired to ask some artists whom she adored to sing with her on a full album called Duets. This album was released in November 2005 and besides another recording with Ron Sexsmith it also included songs with artists such as Syd Matters and Teitur. The collaboration with the band Madrugada on the single "Lift Me" gained her another Norwegian Grammy.[4]

Brun spent much of the next couple of years touring the world in many different stage arrangements. She has played with a full band including string section, just herself and string section at times, sometimes just a cello, perhaps with one backing vocalist – or maybe three. Of course it all started with her and the acoustic guitar, so she often ends up coming back to these solo performances too. "There is something about the focus in playing by myself that fascinates me", she says. "There’s nothing to hide behind when I’m alone on stage and it becomes almost meditative for me when I play."

One of her tours was with a string quintet, and it was recorded and released as Live in Scandinavia (2007) and featured Nina Kinert and the guitarist Staffan Johansson. The album includes songs from Brun's first two albums with new string arrangements by Malene Bay-Foged.

In 2008 Brun released her third studio album, Changing of the Seasons, which was produced by Valgeir Sigurðsson (Bonnie 'Prince' Billy, Múm, Coco Rosie). It included string arrangements by American composer Nico Muhly (Antony and the Johnsons, Grizzly Bear, The Reader soundtrack). Later the same year came the album Sketches, which included acoustic, demo versions of the songs on Changing of the Seasons. The Sketches tour featured a stripped down, sparse sound and now touring with musicians Rebekka Karijord, Jennie Abrahamson and Linnea Olsson, there were memorable gigs in places such as the Union Chapel in London.[4]

Back on the road, a concert at the Stockholm Concert Hall was filmed and released as an album and live DVD in 2009. Late in 2009, Brun organised the No More Lullabies concert to bring attention to the issues of climate justice. She assembled 24 well-known Swedish artists such as Robyn, Loney, Dear, Titiyo and Benny Andersson of ABBA to take part in seven hours of live music and visuals to mark the International Day of Climate Action on 24 October 2009. They succeeded in drawing attention to the issue before the upcoming COP15 conference.[4]

Brun featured as one of the guests on Peter Gabriel's 2011 studio album New Blood, singing Kate Bush's part on the re-recorded version of "Don't Give Up", recorded in 2010. She was subsequently invited to perform with him as support act and back-up singer on the New Blood tour throughout 2010.

In late 2011, Brun released her sixth studio album It All Starts with One, produced by Tobias Fröberg.

On 11 March 2013, Brun performed her own adaptation of Dido's Lament, from Dido and Aeneas by Henry Purcell, at The Roundhouse in London.[5]

This article uses material from the article Ane Brun from the free encyclopedia Wikipedia and it is licensed under the GNU Free Documentation License.