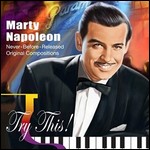 From Wikipedia, the free encyclopedia.
Marty Napoleon (born June 2, 1921) is an American jazz pianist born in Brooklyn, New York, perhaps best known for having replaced Earl Hines in Louis Armstrong's All Stars in 1952. In 1946 he worked with Gene Krupa and went on to work with his uncle Phil Napoleon, a trumpeter, in Phil's Original Memphis Five. In the 1950s he also worked with his brother Teddy Napoleon, a pianist, and from 1966-1971 he was performing with Louis Armstrong again.

This article uses material from the article Marty Napoleon from the free encyclopedia Wikipedia and it is licensed under the GNU Free Documentation License.