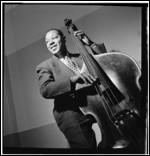 Hall grew up in Philadelphia, where he played cello and tuba early in life before settling on bass at age 17. He moved to New York in 1936, where he played with Billy Hicks (1936–37), Skeets Tolbert (1937–38), and Teddy Wilson in both big band and small ensemble format (1939–41). Following time with Ellis Larkins (1942–43) and Mary Lou Williams, Hall took a job as a staff musician at CBS, working in Paul Baron's orchestra on the Mildred Bailey Show. He also worked on Broadway theater pit orchestras for the next several decades. In 1946, he founded his own label, Wax Records, which was bought by Atlantic Records in 1949.

Hall had an extended partnership with Erroll Garner, playing with him intermittently from 1945 to 1963. He also played later in life with Benny Goodman (1966), Hazel Scott, Tiny Grimes, Alberta Hunter (1977–78), and Doc Cheatham. He led five numbers on his own label in 1946-47 and four on Columbia Records Europe in 1959.

This article uses material from the article Al Hall (musician) from the free encyclopedia Wikipedia and it is licensed under the GNU Free Documentation License.