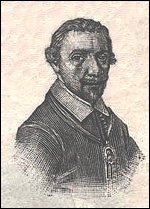 born in 1590 in Niedersachsen, Germany

Johann Schop (ca. 1590 1667) was a German violinist and composer, much admired as a musician and a technician, who was a virtuoso and whose compositions for the violin set impressive technical demands for that area at that time.[1] In 1756 Leopold Mozart commented on the difficulty of a trill in a work by Schop, probably composed before 1646.[2]

He worked in Hamburg. He published books of violin music in 4 to 6 parts; some of his music was performed at the Peace of Westphalia celebrations.

His melody Werde munter, mein Gemüte of 1641 was used by Johann Sebastian Bach for the chorale movements (6 and 10) of his cantata Herz und Mund und Tat und Leben, BWV 147. The sixth movement is Wohl mir, daß ich Jesum habe, and the tenth movement is Jesu bleibet meine Freude. Under the English title of Jesu, Joy of Man's Desiring Bach's chorale has been arranged for different instruments and has gained wide popularity.[3]

This article uses material from the article Johann Schop from the free encyclopedia Wikipedia and it is licensed under the GNU Free Documentation License.

Claude Debussy Scherzo Intermezzo aus dem Trio G-Dur für Violine, Cello und Klavier
Update Required To play the media you will need to either update your browser to a recent version or update your Flash plugin.