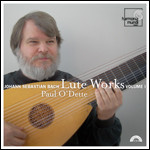 O'Dette began playing the electric guitar in a rock band in Columbus, Ohio, where he grew up. Eventually this led him into playing guitar transcriptions of lute music, and not long after that he opted for the lute (as well as the related archlute, theorbo, and Baroque guitar) as his primary instruments, and now he specializes in the performance of Renaissance and Baroque music. He has made more than 120 recordings, earning five Grammy nominations and numerous other awards. In addition to his activities as a performer, Paul O'Dette is an avid researcher, having worked extensively on the performance and sources of seventeenth-century Italian and English solo song, continuo practices and lute technique.

Since 1976, he has served as Professor of Lute and Director of Early Music at the Eastman School of Music in New York. He is the Co-Artistic Director of the Boston Early Music Festival. He lives in Rochester, New York with his wife, son, and daughter.

This article uses material from the article Paul O'Dette from the free encyclopedia Wikipedia and it is licensed under the GNU Free Documentation License.