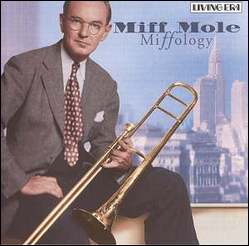 Irving Milfred Mole, better known as Miff Mole (11 March 1898 – 29 April 1961) was a jazz trombonist and band leader. He is generally considered as one of the greatest jazz trombonists[1] and credited with creating "the first distinctive and influential solo jazz trombone style."[2] His major recordings included "Slippin' Around", "Red Hot Mama" in 1924 with Sophie Tucker on vocals, "Miff's Blues", "There'll Come a Time (Wait and See)", on the film soundtrack to the 2008 movie The Curious Case of Benjamin Button, and "Toddlin' Blues" and "Davenport Blues", recorded in 1925 with Bix Beiderbecke and Tommy Dorsey as Bix Beiderbecke and His Rhythm Jugglers.

Miff Mole was born in Roosevelt, New York. He studied violin and piano as a child and switched to trombone when he was 15.[3] He played in Gus Sharp's orchestra for two years and in the 1920s went on to become a significant figure of the New York scene: he was a member of the Original Memphis Five (1922), played with Russ Gorman, Roger Wolfe Kahn, Sam Lanin, Ray Miller and many others.[3] His other activities, like those of many jazz musicians at the time, included working for silent film and radio orchestras.[4] In 1926–9 Mole and trumpeter Red Nichols led a band called "Miff Mole and His Little Molers". They recorded frequently until 1930.[5]

Miff Mole and his band the Molers backed Sophie Tucker who was known as "The Last Of The Red Hot Mammas" and who was one of the most popular singers of the Teens and 1920s. Mole and his band supported her on her 1927 Okeh recordings of "After You've Gone", "Fifty Million Frenchmen Can't Be Wrong", "I Ain't Got Nobody", and "One Sweet Letter From You". Miff Mole and his band, which included Eddie Lang, Jimmy Dorsey, Red Nichols, and Vic Berton, also backed her during her live performances.

It can not be overstated how influential Mole's OKeh records (1927-1930) were. 26 of the 28 were instrumental and Mole selected classic Dixieland tunes, as well as some current popular hit songs. Clean copies have always been highly prized by collectors.

In addition to the groups under his own name, Mole was prominently identified from 1925 to 1929 with various recording bands led by cornetist Red Nichols: The Red Heads, The Hottentots, The Charleston Chasers, The Six Hottentots, The Cotton Pickers, Red and Miffs Stompers, and especially Red Nichols and His Five Pennies. These bands recorded for a variety of different labels such as Perfect, Domino, Pathé, Edison, OKeh and Victor, though the Five Pennies name was only used for their recordings on Brunswick. The original Five Pennies band consisted of Nichols on cornet, Mole on trombone, Jimmy Dorsey on clarinet and alto sax, Eddie Lang on guitar, Arthur Schutt on piano and Vic Berton (who came up with the name for the group) on drums, but over time the personnel changed and expanded dramatically. Among the musicians who passed through the Five Pennies were clarinetist Pee Wee Russell, violinist Joe Venuti, bass sax player Adrian Rollini, tuba and bass player Joe Tarto, trombonist-arranger Glenn Miller, and extra trumpet players such as Leo McConville and Charlie Teagarden.

When Jack Teagarden arrived in New York in 1928, he quickly replaced Mole as the new role model for trombonists, with a more legato, blues-oriented approach.[5] Mole, having started working for radio in 1927 (at WOR), changed his focus to working with NBC (1929–38). In 1938–40 he was a member of Paul Whiteman's orchestra, but his style by then had changed under the influence of Teagarden. In 1942–3 Mole played in Benny Goodman's orchestra, and between 1942–7 he led various dixieland bands. He worked in Chicago in 1947–54.[5]

Due to bad health, Mole played very sporadically during his last years.[5] Miff Mole died in New York City April 29, 1961. A benefit held to raise money for his healthcare expenses was scheduled too late. Mole was interred in the Mole family plot in Greenfield Cemetery, Hempstead, Long Island, New York. Interred with him are his mother, father and two brothers: Ralph and George. His headstone reads "Miff".

Moles solo style with its impeccable technique, including octave-leaps, shakes, and rapid fire cadenzas, had a profound effect on jazz trombone playing in his time. Among those who emulated Moles playing were white trombonists Bill Rank, Glenn Miller, and Tommy Dorsey, and black trombonist Jimmy Harrison. It may even be said that bop trombonist J.J. Johnson was, consciously or unconsciously, playing to some extent in Moles footsteps even though he exhibited an even more dazzling slide and lip technique.

In 2005, Miff Mole's 1928 recording of "Shim-Me-Sha-Wabble" with the Little Molers, originally as Okeh 41445, was used in the soundtrack to the Russell Crowe movie Cinderella Man.

In 2008, his composition "There'll Come a Time (Wait and See)", written with Wingy Manone, was on the soundtrack to the Academy Award-nominated movie The Curious Case of Benjamin Button.

Miff Mole's compositions included "Slippin' Around", "There'll Come a Time (Wait and See)" with Wingy Manone, "Hangover" with Red Nichols, "Worryin' The Life Out Of Me" with Frank Signorelli and Sidney Keith 'Bob' Russell, and "Miff's Blues".

This article uses material from the article Miff Mole from the free encyclopedia Wikipedia and it is licensed under the GNU Free Documentation License.