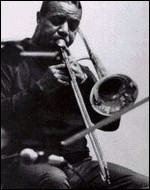 Benny Morton (January 31, 1907 December 28, 1985), born in New York City, was a jazz trombonist most associated with the swing genre. He was praised by fellow trombonist Bill Watrous among others. One of his first jobs was working with Clarence Holiday, and he appeared with Clarence's daughter Billie Holiday towards the end of her life on The Sound of Jazz.[1] Morton was a member of pianist Teddy Wilson's Sextet throughout the early 1940s. In the 1960s he was part of the Jazz Giants band: "Wild" Bill Davison (cornet), Herb Hall (clarinet and alto), Claude Hopkins (piano), Arvell Shaw (bass) and Buzzy Drootin (drums). They toured the U.S. and frequently in Canada where they did some recording for Sackville Records. Towards the end of the 60's he played with an offshoot of the Jazz Giants under the leadership of Drootin, called Buzzy's Jazz Family, with Herman Autrey replacing Davison, Buzzy's nephew Sonny Drootin replacing Hopkins, and Eddie Gibbs replacing Shaw. That stated he is probably best known for his work with Count Basie and Fletcher Henderson.

On February 23, 1934, Morton led an outstanding session of 4 songs that were issued under his own name (Benny Morton & His Orchestra). Made up mostly of member of Fletcher Henderson's and Don Redman's band, they included:

This article uses material from the article Benny Morton from the free encyclopedia Wikipedia and it is licensed under the GNU Free Documentation License.