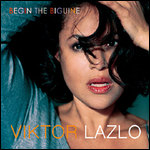 Viktor Lazlo (real name: Sonia Dronier, born 7 October 1960 in Lorient, France) is a French-Belgian singer of Grenadian and Martiniquan descent. She studied in Belgium, where she is primarily known. Her biggest hit was "Breathless" in 1987. That year she also hosted the Eurovision Song Contest 1987 held in Brussels.[1]

Dronier took her stage name from Paul Henreid's character Victor Laszlo in the 1942 film Casablanca. She sings in French, English, Spanish and German.

Single releases differed from country to country. The brackets indicate where the single was released. Int = international.

This article uses material from the article Viktor Lazlo from the free encyclopedia Wikipedia and it is licensed under the GNU Free Documentation License.

François-André Danican Philidor Ouvertüre zur Oper "Tom Jones"
Update Required To play the media you will need to either update your browser to a recent version or update your Flash plugin.