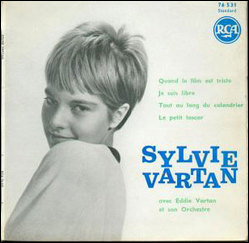 Sylvie Vartan (born 15 August 1944) is a Bulgarian-French singer.[1] She is known as one of the most productive and tough-sounding yé-yé artists.[2] Her performances often featured elaborate show-dance choreography,[2] and she made many appearances on French and Italian TV. Yearly shows with then-husband Johnny Hallyday attracted full houses at the Olympia and the Palais des congrès de Paris throughout the 1960s and mid-1970s.[2] In 2004, after a break in performances, she began recording and giving concerts of jazz ballads in francophone countries.[1]

Vartan was born in Iskretz, Sofia Province, Bulgaria. Her father, Georges Vartan, was born in France to an Armenian father and a Bulgarian mother.[3] He worked as an attaché at the French embassy in Sofia. Her mother, Ilona (née Mayer), was of Hungarian Jewish background, and the daughter of a prominent architect, Rudolf Mayer.[1][4][5][page number needed] The original family name was Vartanian, but her parents shortened it to Vartan after they fled to France. In September 1944, when the Soviet Army occupied Bulgaria, the Vartanian family house was nationalised and they moved to Sofia.[1] In 1952, Dako Dakovski, a film director and her fathers' friend offered Sylvie a role of a schoolgirl in the movie Pod igoto. The film was about Bulgarian rebels against the Turkish occupation. Being a part of the film had a lasting impression on her and made her dream of becoming an entertainer.[1]

The privations of the postwar Bulgaria made the family emigrate to Paris in December 1952.[1] At first they stayed in the Lion d'Argent hotel near Les Halles, where Georges found a job. The family stayed in a single room at the Angleterre Hotel for the following four years. Young Sylvie had to work hard to keep up at school and to assimilate with her schoolmates. She learned French in two years. In 1960 her family moved to an apartment in Michel Bizot Avenue.[1] Thanks to the example of her music producer brother Eddie, music became teenage Sylvie's main interest. Her most influential genres were jazz and, out of spite toward her strict high school, rock 'n' roll. Her favourites included Brenda Lee, Bill Haley and Elvis Presley.[1]

In 1961, Eddie offered Sylvie to record the song "Panne d'essence" with the French rocker Frankie Jordan. The EP by Decca Records was a surprise hit.[1] Although she was not credited on the sleeve, "Panne d'essence" provided Vartan her first appearance on French television. The journalists gave her the nickname la collégienne du twist.[1] After the "twisting schoolgirl" had finished the Victor Hugo High School, she was free to sign a contract with Decca Records to start recording her own EP. By the beginning of December 1961 the EP with the title song "Quand le film est triste", covering Sue Thompson's "Sad Movies" was on sale.[1] This was yet another hit, that served her first concert in Paris Olympia hall on 12 December 1961. Quickly "Est-ce que tu le sais?", her version of the Ray Charles song "What'd I Say", was released. She opened for Vince Taylor at Paris Olympia for her second concert.[1] In July she toured France with Gilbert Bécaud. In fall, 1962 she released her version of "The Loco-Motion" on EP and her first LP Sylvie. Her next hit was "Tous mes copains", issued on EP in 1962.[1] A small part of a singer in the film Un clair de lune à Maubeuge was her first adult appearance in a movie.[2] In 1963, Paul Anka offered her "I'm watching you", her first international hit (Japan, Korea). In the same year she did four TV specials and became the darling of the teen magazine Salut les Copains.[2] Six of her thirty-one songs released in 1962/1963 became top 20 European hits.[2] In late winter 1963, Vartan toured France with Johnny Hallyday and starred with him in the movie D'où viens-tu, Johnny?.

Later in 1963, after announcing their engagement over the radio, the young couple performed to a noisy audience of 200,000 at the La Nation Square of Paris.[2] At the end of the year, they traveled to Nashville, Tennessee to record an album with The Jordanaires. With the special treatment of vocalists, strings and brass sections in the true Nashville style, these recordings were a great commercial success in France.[2] The album Sylvie à Nashville included the hits "La plus belle pour aller danser" and "Si je chante" and three news songs in English (featuring Paul Anka again for one of them). Being accompanied by the movie Cherchez l'idole, the EP with "La plus belle pour aller danser" became n° 1 in France, sold over a million copies in Japan, very successful in Korea and Spain too, and her 1st release in Italy.[1] "Il n'a rien retrouvé" became another of her international hits on the same year. In 1964 at the Paris Olympia, she appeared as the main attraction (third performance) on the same bill as The Beatles and Trini Lopez. The commercial for the clothes "Renown" and a supporting role in the film "Patate" made her even more famous. The singer made appearances on U.S. TV:The Ed Sullivan Show, Shindig!, Hullabaloo, and an international concert tour, including Canada, South America and Polynesia.[1] In Tokyo she gave 13 concerts in 12 days.[1]

In December 1964, as her husband went into military service, brother Eddie hired two English songwriting session musicians, Tommy Brown on drums and Mick Jones on guitar, as they went to record in New York. The two Englishmen wrote a hit for her, called "Cette lettre-là".[2] Set in the smart design of the J.C. Averty Show, "Cette lettre-là" was the first of Sylvie Vartan's TV variety night performances.[6] In 196667 she recorded more original hits. "Dis moi, que tu m'aimes" was accompanied by a group of male dancers and aired on TV on 9 July 1967. "Le jour qui vient" was aired on the Dim dam dom program of the French Television 1 in color in 14 January 1968. "2'35 de bonheur" and "Comme un garçon" were other number 1 in France as in Italy, Belgium, Japan or Korea.[6]

On 11 April 1968, she suffered injuries in a traffic accident but was back on tour in August. Her new sexy cabaret dancer image[1] was demonstrated to the French TV audience in the "Jolie poupée" show on 4 December 1968. In the show, the collaboration with Maritie and Gilbert Carpentier produced a highly entertaining result.[6] The variety night included the performance of "Irrésistiblement", accompanied by elaborate girl-group choreography, and "Jolie Poupée", a dialogue between a doll Sylvie and an adult one.[6] The hits of the "Jolie poupée" show were released as the Maritza album. In Italy, she released a cover version of Mina's "Zum zum zum". Being the 23rd biggest selling single of the following year in Italy, Vartan's version did better in Italian charts than Mina's original.[7] Vartan continued with her one-woman shows at the Paris Olympia in December 1968. The shows were published as the documentary Sylvie à L'Olympia.[8] For nine Saturday nights in winter of 1969, Vartan starred in the Doppia coppia variety nights of RAI, performing her hits "Irrésistiblement" ("Irresistibilmente") and "Le jour qui vient" ("Una cicala canta") in Italian.[1][6] In March 1969, "Irrestibilmente" entered the Italian charts at No. 3, peaked at No. 2 and stayed in Top Ten for 10 weeks. In 1969 the single was the No. 22 single on the Italian chart. The tender ballad "Blam blam blam", written originally for the Doppia coppia, peaked at No. 14 of the Italian charts and was among the 100 biggest selling singles in Italy in 1969.[9]

After her world tour in autumn 1969, she returned to Italy to perform "Festa negli occhi, festa nel cuore" on a Canzonissima variety night and "C'est un jour à rester couché" on the Incontro con Sylvie Vartan TV show, recorded in the Gattopardo Club of Messina.[6] Her appearances, dressed in short skirts and Barbarella boots, with each song having a different costume, were popular in Italy and France. The cartoonists of both countries even drew Sylvie Vartan lookalikes.[1]

In spite of suffering a second serious car accident in 1970,[1] Sylvie Vartan continued extensive performing and recording[2] and, in 1972, she starred in the film Malpertuis. She sold millions of records on the RCA label (the most prolific artist on this label after Elvis Presley). Her most famous songs are "J'ai un probleme", "L'amour au Diapason" (73), "Parle moi de ta vie"(71), "Petit Rainbow" (77), "Bye Bye leroy Brown"(74), "Disco Queen", "Nicolas" (79) and "Caro Mozart", an international hit in Italian (72). Her annual world tours and Italian TV shows, however, continued to include her best of the late sixties.[1] In 1976, she recorded "Qu'est-ce qui fait pleurer les blondes?", a disco-style cover of a John Kongos's track, which topped the French chart for several weeks. Her disco era climaxed at the Dancing star TV show on TF1 on 10 September 1977. The show was produced by Maritie and Gilbert Carpentier. The performances were published by RCA Records as the LP Dancing star.[1] After a week of concerts in Las Vegas in 1982, she released "Love again" in duet with John Denver, a No. 85 single on Billboard Hot 100 followed in 1985 by a new album in the USA with "Double exposure " and "One shot lover". In 1986, she took a break from show business and came back with "C'est fatal" (E fatale in Italy) in 1989.

In 1990, she gave a concert at the Palace of Culture of Sofia, opening and closing with a Bulgarian song. This was her first visit to the city after her emigration.[1] In 1991 she performed for three weeks at the Palais des Sports in Paris. She reached the charts with "Quand tu es là". In 1995, she starred in "L'ange noir" directed by Jean-Claude Brisseau. In 1996, Sylvie recorded a successful album ("Toutes les femmes ont un secret") featuring "Je n'aime encore que toi" written by Quebecer Luc Plamondon. After her brother Eddie died in 2001, she took another break from performing in public. In fall 2004 she started recording and giving concerts of jazz ballads in francophone countries and Japan.[1] She performed two weeks in the Palais des congrès in 2004 and 2008 (sold out concerts each time). In 2009 she toured in Turkey, France, Japan, Switzerland, Quebec,USA, Italy, Spain, Netherlands and Belgium.

Sylvie Vartan was one of the first rock girls in France. Before her, it was not common for a French pop artist to sing and dance at the same time.[10] Sylvie Vartan was the most productive and active of the yé-yé girls;[2] and her rock-and-roll voice and rhythms made her the toughest-sounding of those.[2]

Vartan's concerts were said to be an excuse for some of the first violent acts of rockers in French theatres.[1] There is a Sylvie Vartan rose variety and a toy factory named after her. The Mattel toy company designed a dummy model after her body.[10] In 2005, the singer was appointed as WHO Goodwill Ambassador for Maternal and Child Health in the European Region.[11]

In 1962, during her second concert in Paris Olympia hall, Vartan met rock musician Johnny Hallyday. On 12 April 1965, they were married in Loconville. They had a son, David Michael Benjamin, later known as David Hallyday. Johnny Hallyday and Vartan were the "golden couple" of their generation in France, and their marriage was among the most carefully watched relationships for the nation's publicity. However, as Hallyday openly preferred his pals to the parenting, they had disagreements and finally divorced on 4 November 1980. She is currently married to record producer Tony Scotti. They have adopted a young Bulgarian girl, Darina. Vartan is an aunt to Eddie Vartan's son Michael Vartan.[1]

This article uses material from the article Sylvie Vartan from the free encyclopedia Wikipedia and it is licensed under the GNU Free Documentation License.