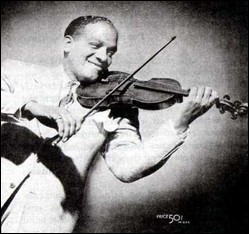 South was a classical violin prodigy who switched to jazz because of limited opportunities for African-American musicians,[1] and started his career playing in vaudeville and jazz orchestras with Freddie Keppard, Jimmy Wade, Charles Elgar, and Erskine Tate in Chicago. He studied at the Chicago College of Music alongside violinist Petrowitsch Bissing.[2]

He was influenced by Hungarian folk music and Roma music starting with a visit to Europe in the 1920s, and adapted the music to jazz.[3] In 1927 he started his own group, Eddie South and his Alabamians, named after the Alabam club where they played in Chicago, and, along with pianist and composer Henry Crowder, toured with them in Europe from 1928 to 1930.

On subsequent visits to Europe in the 1930s, he performed and recorded with guitarist Django Reinhardt and violinists Stéphane Grappelli. He also played in the big bands of Earl Hines from 1947 to 1949.[4] and Michel Warlop. He also led bands that included pianist Billy Taylor and bassist Milt Hinton.

A 1951 recording for Chess Records, Eddy [sic] South and his Orchestra, credited Johnny Pate on bass and arrangements and was also the first of a series of Chess recordings on which Pate collaborated with saxophonist Eddie Johnson.[3]

This article uses material from the article Eddie South from the free encyclopedia Wikipedia and it is licensed under the GNU Free Documentation License.