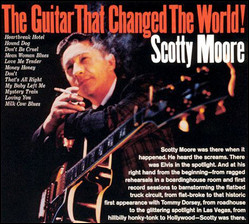 Winfield Scott "Scotty" Moore III (born December 27, 1931) is an American guitarist and recording engineer. He is best known for his backing of Elvis Presley in the first part of his career, between 1954 and the beginning of Elvis' Hollywood years. He was ranked 44th in Rolling Stone magazine's list of 100 Greatest Guitarists of All Time in 2011.[1] He was inducted into the Rock And Roll Hall of Fame (category: sideman) in 2000.[2]

Scotty Moore was born near Gadsden, Tennessee. He learned to play the guitar from family and friends at eight years of age. Although underage when he enlisted, Moore served in the United States Navy between 1948 and 1952.

Moore's early background was in jazz and country music. A fan of guitarist Chet Atkins, Moore led a group called the "Starlite Wranglers" before Sam Phillips at Sun Records put him together with then teenage Elvis Presley. Phillips believed that Moore's lead guitar and Bill Black's double bass were all that was needed to augment Presley's rhythm guitar and lead vocals on their recordings. In 1954 Moore and Black accompanied Elvis on what would become the first legendary Presley hit, the Sun Studios session cut of "That's All Right (Mama)", a recording regarded as a seminal event in rock and roll history. Elvis, Black and Moore then formed the Blue Moon Boys.

For a time, Moore served as Elvis's personal manager.[3] They were later joined by drummer D.J. Fontana. Beginning in July 1954, the Blue Moon Boys toured and recorded throughout the American South and, as Presley's popularity rose, they toured the United States and made appearances in various Presley television shows and motion pictures. The Blue Moon Boys, including Moore, appear in the few 1955 home movie clips that survive of Elvis before he achieved national recognition. Moore, Black, and Fontana also appear on the Dorsey Brothers, Milton Berle, Steve Allen, and Ed Sullivan live TV shows of January 1956 to January 1957. Moore and Fontana also reunited on the 1960 Timex TV special with Frank Sinatra welcoming Elvis' return from the Army.

Moore played on many of Presley's most famous recordings, including "Good Rockin' Tonight", "Baby Let's Play House", "Heartbreak Hotel", "Mystery Train", "Hound Dog", "Too Much" and "Jailhouse Rock". Moore and the Blue Moon Boys also perform (and have additional small walk-in and speaking roles) with Elvis in three of his movies (Loving You, Jailhouse Rock, and King Creole) filmed in 1957 and 1958.

In 1964, Moore released a solo album on Epic Records called The Guitar That Changed the World,[4] played using his Gibson Super 400. For this effort he was fired by Sam Phillips. Moore reunited with Fontana and Presley for the NBC television special known as the '68 Comeback Special, again with his Gibson Super 400 which was also played by Presley.

For his pioneering contribution, Moore has been recognized by the Rockabilly Hall of Fame. In 2000, he was inducted into the Rock and Roll Hall of Fame.

Moore's playing on his Gibson with his unique finger-picking style with pick at same time, as on the Sun and early RCA recordings, was unique and exciting, representing a move of the Chet Atkins style into a more rockabilly mode. Moore's best performances are often considered precedent-setting.

Moore is given credit as the pioneer of the rock 'n' roll lead guitarist. Many popular guitarists cite Moore as the performer that brought the lead guitarist to a dominant role in a rock 'n' roll band. Although some lead guitarists/vocalists, such as Chuck Berry and blues legend BB King, had gained popularity by the 1950s, Presley rarely played his own lead while performing, instead providing rhythm guitar and leaving the lead duties to Moore. As a guitarist, Moore was a noticeable presence in Presley's performances, despite his introverted demeanor. He became an inspiration to many subsequent popular guitarists, including Bruce Springsteen and Keith Richards of the Rolling Stones. While Moore was working on his memoir with co-author James L. Dickerson, Richards told Dickerson, "Everyone else wanted to be Elvis--I wanted to be Scotty."[5] Richards has stated many times (Rolling Stone magazine, Life autobiography) that he could never figure out how to play the "stop time" break and figure that Moore plays on "I'm Left, You're Right, She's Gone" (Sun), and that he hopes it will remain a mystery.

While with Presley, Moore initially played a Gibson ES-295 (nicknamed "The Guitar that Changed the World"[6]),[7] before switching to a Gibson L5[6] and subsequently a Gibson Super 400.[8]

One of the key pieces of equipment in Moore's sound on many of the recordings with Elvis, besides his guitars, was the use of the Ray Butts EchoSonic, a guitar amplifier with a tape echo built in, which allowed him to take his trademark slapback echo on the road.[8]

Emory Smith portrayed Moore in the 1981 documentary film This is Elvis.

The book That's Alright, Elvis: The Untold Story of Elvis's First Guitarist and Manager, is written by Scotty Moore as told to James Dickerson. A recent book called The Blue Moon Boys also tells the story of Moore, Black, and Fontana before, during and after their tenure with Elvis.

Scotty Moore co-wrote the songs "My Kind of Carrying On" and "Now She Cares No More" which were released as Sun 202[9] on Sun Records in 1954 when he was a member of the group Doug Poindexter and the Starlite Wranglers[10] with Bill Black as the bassist.[11] He co-wrote the instrumental "Have Guitar Will Travel" in 1958 with Bill Black, which was released as a 45 single, 107, on the Fernwood Records label.[12]

This article uses material from the article Scotty Moore from the free encyclopedia Wikipedia and it is licensed under the GNU Free Documentation License.