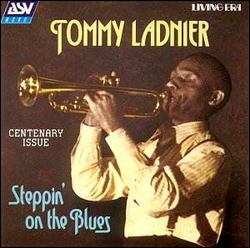 Ladnier was born in Mandeville, Louisiana across Lake Pontchartrain from New Orleans. He played in the local Independence Band led by clarinetist Isidore Fritz (a.k.a. Frick) from c. 1914. Trumpeter Bunk Johnson sometimes also played with this band and gave young Ladnier tuition. In 1917, he moved with his mother to Chicago. At first he, like many Southerners coming to Chicago, worked at the Chicago Stock Yards. He married Hazel B Daisy Mathews in 1920 and became a professional musician around 1921. He played for some time in St. Louis with Charlie Creath.
From 1923, he played in Chicago and made numerous recordings for Paramount Records with pianist Lovie Austin, accompanying blues singers like Ma Rainey, Ida Cox, and Alberta Hunter. In 1923, his beloved mother was accidentally shot in at a party quarrel. This took him deeply and the incident is generally considered as the cause of his alcoholic abuse. For some time Ladnier played with his great inspiration King Oliver.
In 1925, Ladnier joined pianist Sam Wooding for an extensive European tour (Germany, Sweden, Denmark, Spain, and Russia). This orchestra recorded in Berlin. He then in 1926 returned to New York, for a while playing with dance band leader Billy Fowler, subsequently joining Fletcher Henderson from October 1926 to November 1927. During this year, the Henderson orchestra was at its prime and Ladnier was one of the main soloists along with trumpeter Joe Smith and saxophonist Coleman Hawkins. This orchestra made some of the most cherished Henderson recordings. Ladnier then rejoined the Sam Wooding Orchestra for another European tour (Germany, Austria, Turkey, Switzerland, Italy, and France) but left Wooding in January 1929 to work as a free-lancer in Paris. A short tour with dancer Harry Fleming brought him to Spain. In Spain, Ladnier also met dancer Louis Douglas and joined him shortly in November 1929 in Paris, acting as orchestra leader. He then again free-lanced in Paris until summer 1930, when he joined the Noble Sissle dance band, performing in Paris and London. He subsequently went back to the States at the end of 1930 and stayed with Sissle until January 1932, including a US tour and an ill-planned short visit to Paris. The Sissle orchestra made some recordings in London and New York.
Back in U.S.A. in 1932, Ladnier teamed up with Sidney Bechet, forming the New Orleans Feetwarmers. This sextet made some now classical recordings in 1932. During the depression, Ladnier and Bechet tried to run a tailor shop in Harlem, but neither of them was really business-oriented. Ladnier then left New York and played in the Eastern States, sometimes giving trumpet lessons. For a year, he lived in Stamford, Connecticut.
Hugues Panassié, who had met Ladnier in Paris in 1930, came to New York in the autumn of 1938 to make recordings and found Ladnier. Together with clarinetist Mezz Mezzrow, Ladnier then made a series of now classic recordings. Ladnier and Bechet also reunited for one recording session and participated in the first Spirituals to Swing concert arranged by John Hammond in December 1938. His very last recordings were with Mezz Mezzrow and singer Rosetta Crawford in February 1939.

Tommy Ladnier died of a heart attack in New York City at the age of 39. He is buried at Frederick Douglass Memorial, Staten Island.

Tommy Ladniers playing in the early Paramount recordings is characterized by a moaning sound inspired by King Oliver, earning him the name The Praying Cornet. He later on developed a more direct playing style inspired by Louis Armstrong, later even more refined into an early swing style. His use of syncopations was outstanding and his intensity sometimes overwhelming. In his last recordings for Panassié, his playing is still more refined but without the strong force of the previous decade. Despite this, these recordings are among his best. He was a true improviser and he succeeded to vary his playing all the time, as can be heard in the many recordings that exist with up to four different takes of the same tune. Tommy Ladnier learned during his European years that skin color was not so important there as in the U.S.A. and he loved the colorblind Frenchmen. This is probably the reason why he quit the very rewarding Henderson job and again joined Wooding, whose orchestra was inferior to Henderson. He also many times refused to play commercial music, which is the reason why he, like Bechet, rejoined Noble Sissle during the worst depression years.

This article uses material from the article Tommy Ladnier from the free encyclopedia Wikipedia and it is licensed under the GNU Free Documentation License.

Carl Maria von Weber Alla Polacca aus dem Klarinettenkonzert Nr. 2 Es-Dur op. 74
Update Required To play the media you will need to either update your browser to a recent version or update your Flash plugin.