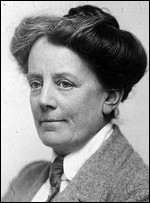 Dame Ethel Mary Smyth, DBE (/smaɪθ/, to rhyme with Forsyth;[1] 22 April 1858 – 8 May 1944) was an English composer and a member of the women's suffrage movement. Her compositions include songs, works for piano, chamber music, orchestral works, choral works and operas.

Smyth tended to be marginalised as a ‘woman composer’, as though her work could not be accepted as mainstream, yet when she produced more delicate compositions, they were criticised for not measuring up to the standard of her male competitors. She was the first female composer to be granted a damehood.

Ethel Smyth was the fourth of eight children. The youngest was Robert ("Bob") Napier Smyth (1868-1947), who rose to become a Brigadier in the British Army. She was the aunt of Lieutenant General Sir Ralph Eastwood.

She was born in Sidcup, Kent, which is now in the London Borough of Bexley, as the fourth of a family of eight children. While April 22 is the actual day of her birth, Smyth habitually stated it was April 23, the day that was celebrated by her family, as they enjoyed the coincidence with William Shakespeare's.[2] Her father, John Hall Smyth, who was a major general in the Royal Artillery, was very much opposed to her making a career in music.[3] She lived at Frimhurst, near Frimley Green[4] for many years, before moving to Hook Heath on the outskirts of Woking.

She first studied privately with Alexander Ewing when she was seventeen. He introduced her to the music of Wagner and Berlioz. After a major battle with her father about her plans to devote her life to music, Smyth was allowed to advance her musical education at the Leipzig Conservatory, where she studied composition with Carl Reinecke. She left after a year, however, disillusioned with the low standard of teaching, and continued her music studies privately with Heinrich von Herzogenberg.[3] While she was at the Leipzig Conservatory, she met Dvořák, Grieg and Tchaikovsky. Through Herzogenberg, she also met Clara Schumann and Brahms.[3]

Smyth's extensive body of work includes the Concerto for Violin, Horn and Orchestra and the Mass in D. Her opera The Wreckers is considered by some critics to be the "most important English opera composed during the period between Purcell and Britten."[3] Another of her operas, Der Wald, mounted in 1903, was for more than a century the only opera by a woman composer ever produced at New York's Metropolitan Opera[3][5] (until Kaija Saariaho's L'Amour de loin in December 2016).[6][7]

Recognition in England came somewhat late for Ethel Smyth, noted conductor Leon Botstein at the time he conducted the American Symphony Orchestra's US premiere of The Wreckers in New York on 30 September 2007:

On her seventy-fifth birthday in 1934, under Beecham's direction, her work was celebrated in a festival, the final event of which was held at the Royal Albert Hall in the presence of the Queen. Heartbreakingly, at this moment of long-overdue recognition, the composer was already completely deaf and could hear neither her own music nor the adulation of the crowds.[8]

However, she found a new interest in literature and, between 1919 and 1940, she published ten highly successful, mostly autobiographical, books.[3]

Overall, critical reaction to her work was mixed. She was alternately praised and panned for writing music that was considered too masculine for a "lady composer", as critics called her.[9] Eugene Gates notes:

Smyth's music was seldom evaluated as simply the work of a composer among composers, but as that of a "woman composer." This worked to keep her on the margins of the profession, and, coupled with the double standard of sexual aesthetics, also placed her in a double bind. On the one hand, when she composed powerful, rhythmically vital music, it was said that her work lacked feminine charm; on the other, when she produced delicate, melodious compositions, she was accused of not measuring up to the artistic standards of her male colleagues.[10]

Other critics were more favourable: "The composer is a learned musician: it is learning which gives her the power to express her natural inborn sense of humour... Dr. Smyth knows her Mozart and her Sullivan: she has learned how to write conversations in music... [The Boatswain's Mate] is one of the merriest, most tuneful, and most delightful comic operas ever put on the stage."[11]

Involvement with the suffrage movement

In 1910 Smyth joined the Women's Social and Political Union, a suffrage organization, giving up music for two years to devote herself to the cause. Her "The March of the Women" (1911) became the anthem of the women's suffrage movement. In 1912, when the WSPU's leader, Emmeline Pankhurst, called on members to break a window in the house of any politician who opposed votes for women, Smyth was one of the 109 members who responded to Pankhurst's call. She, Pankhurst, and 100 other women were arrested, and she served two months in Holloway Prison.[12][13] When her proponent-friend Thomas Beecham went to visit her there, he found suffragettes marching in the quadrangle and singing, as Smyth leaned out a window conducting the song with a toothbrush.[14]

Smyth had several passionate affairs in her life, most of them with women. Her philosopher-friend and the librettist of some of her operas, Henry Bennet Brewster, may have been her only male lover. She wrote to him in 1892: "I wonder why it is so much easier for me to love my own sex more passionately than yours. I can't make it out, for I am a very healthy-minded person."[15] Smyth was at one time in love with the married suffragette Emmeline Pankhurst. At age 71, she fell in love with writer Virginia Woolf — herself having worked in the women's suffrage movement[16] — who, both alarmed and amused, said it was "like being caught by a giant crab", but the two became friends.[12] Smyth's relationship with Violet Gordon-Woodhouse is depicted satirically in Roger Scruton's 2005 opera, Violet.

Smyth was actively involved in sport throughout her life. In her youth, she was a keen horse-rider and tennis player. She was a passionate golfer and a member of the ladies' section of Woking Golf Club, near where she lived. After she died and was cremated, her ashes were, as she had requested, scattered in the woods neighbouring the club[17] by her brother Bob.[18]

In recognition of her work as a composer and writer, Smyth was made a Dame Commander of the Order of the British Empire (DBE) in 1922,[3][19] becoming the first female composer to be awarded a damehood.[20] Smyth received honorary doctorates in music from the Universities of Durham and Oxford.[17] She died in Woking in 1944 at the age of 86.[21]

Ethel Smyth featured, under the name of Edith Staines, in E. F. Benson's Dodo books (1893–1921), decades before the quaint musical characters of his more famous Mapp and Lucia series. She "gleefully acknowledged" the portrait, according to Prunella Scales.[22] She was later a model for the fictional Dame Hilda Tablet in the 1950s radio plays of Henry Reed.[23]

She was portrayed by Maureen Pryor in the 1974 BBC television film Shoulder to Shoulder.

In 2018 and 2019 Lucy Stevens has been playing Ethel Smyth on stage at various venues in Britain.[25]

This article uses material from the article Ethel Smyth from the free encyclopedia Wikipedia and it is licensed under the GNU Free Documentation License.