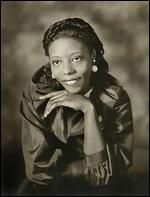 Mary Lou Williams (born Mary Elfrieda Scruggs; May 8, 1910 – May 28, 1981) was an American jazz pianist, composer, and vocalist. She wrote hundreds of compositions and arrangements, and recorded more than one hundred records (in 78, 45, and LP versions).[1] Williams wrote and arranged for such bandleaders as Duke Ellington and Benny Goodman, and she was friend, mentor, and teacher to Thelonious Monk, Charlie Parker, Miles Davis, Tadd Dameron, Bud Powell, Dizzy Gillespie, and many others.

Williams was born in Atlanta, Georgia, and grew up in the East Liberty neighborhood of Pittsburgh, Pennsylvania, one of eleven children. As a very young child she taught herself to play the piano and at the age of six, Mary Lou was already helping to support her ten half-brothers and sisters by playing at parties. She began performing publicly at the age of seven, when she became known admiringly in Pittsburgh as "the little piano girl of East Liberty." She became a professional musician in her teens, citing Lovie Austin as her greatest influence.[2]

In 1922, at the age of 12, she was taken on the Orpheum Circuit. The following year she played with Duke Ellington and his early small band, the Washingtonians. One shining salute to her talent came when she was only 15. One morning at three A.M, she was jamming with McKinney's Cotton Pickers at Harlem's Rhythm Club. Louis Armstrong entered the room and paused to listen to her. Mary Lou shyly told what happened: "Louis picked me up and kissed me."[3]

In 1927, Williams married saxophonist John Williams. She met him at a performance in Cleveland where he was leading his group, the Syncopators, and moved with him to Memphis, Tennessee. He assembled a band in Memphis, which included Mary Lou on piano. In 1929, he accepted an invitation to join Andy Kirk's band in Oklahoma City, leaving 19-year-old Mary Lou to head the Memphis band for its remaining tour dates. Williams eventually joined her husband in Oklahoma City but did not play with the band. The group, now known as Andy Kirk's "Twelve Clouds of Joy", relocated to Tulsa, Oklahoma, where Williams, when she wasn't working as a musician, was employed transporting bodies for an undertaker. When the Clouds of Joy accepted a longstanding engagement in Kansas City, Missouri, Williams joined her husband there and began sitting in with the band, as well as serving as its arranger and composer. She provided Kirk with such songs as "Walkin' and Swingin'", "Twinklin'", "Cloudy'", "Little Joe from Chicago" and others.

From the first record sides Kirk made in Kansas City, Williams was on board as pianist and arranger. (Six sides were recorded in Kansas City during 1929 and remaining 17 sides were recorded in Chicago in 1930, and a further two were recorded in New York in 1930.) During one of those trips to Chicago in 1930, Williams recorded "Drag 'Em" and "Night Life" as piano solos. Williams took the name "Mary Lou" at the suggestion of Brunswick's Jack Kapp.[4] The records sold briskly, raising Williams to national prominence. Soon after the recording session she signed on as Kirk's permanent second pianist, playing solo gigs and working as a freelance arranger for such noteworthy names as Earl Hines, Benny Goodman and Tommy Dorsey. In 1937, she produced In the Groove (Brunswick), a collaboration with Dick Wilson, and Benny Goodman asked Mary to write a blues for his band. The result was "Roll 'Em", a boogie-woogie piece based on the blues, which followed her successful "Camel Hop", named for Goodman's radio show sponsor, Camel cigarettes. Goodman tried to put Williams under contract to write for him exclusively, but she refused, preferring to freelance instead.[5]

In 1942, Williams, who had divorced her husband, left the "Twelve Clouds of Joy" band, returning again to Pittsburgh. She was joined there by bandmate Harold "Shorty" Baker, with whom she formed a six-piece ensemble that included Art Blakey on drums. After a lengthy engagement in Cleveland, Baker left to join Duke Ellington's orchestra. Williams joined the band in New York City, and then traveled to Baltimore, where she and Baker were married. She traveled with Ellington and arranged several tunes for him, including "Trumpet No End" (1946), her version of Irving Berlin's "Blue Skies".[6] She also sold Ellington on performing "Walkin' and Swingin'". Within a year she had left Baker and the group and returned to New York.

Williams then accepted a regular gig at the Café Society Downtown, started a weekly radio show called Mary Lou Williams's Piano Workshop on WNEW, and began mentoring and collaborating with many younger bebop musicians, most notably Dizzy Gillespie and Thelonious Monk. In 1945, Williams composed the bebop hit "In the Land of Oo-Bla-Dee" for Gillespie. "During this period Monk and the kids would come to my apartment every morning around four or pick me up at the Café after I'd finished my last show, and we'd play and swap ideas until noon or later", Williams recalled in Melody Maker. Although closely aligned with the bop musicians during her time in New York City, Williams also staged a large-scale orchestral rendition of her composition Zodiac Suite at New York's Town Hall in 1945, with bassist Al Lucas and drummer Jack "The Bear" Parker, and the New York Philharmonic. She recorded Zodiac with Lucas and Parker on the Asch label: the recording is available today on Smithsonian Folkways Recordings.

In 1952, Williams accepted an offer to perform in England and ended up staying in Europe for two years. When she returned to the United States she took a hiatus from performing, converting in 1956 to Roman Catholicism. Her energies were devoted mainly to the Bel Canto Foundation, an effort she initiated to help addicted musicians return to performing. Two priests and Dizzy Gillespie convinced her to return to playing, which she did at the 1957 Newport Jazz Festival with Dizzy's band.

Father Peter O'Brien, a Catholic priest, became her close friend and personal manager in the 1960s. Together they found new venues for jazz performance at a time when no more than two clubs in Manhattan offered jazz full-time. In addition to club work, Mary played colleges, formed her own record label and publishing companies, founded the Pittsburgh Jazz Festival and made television appearances. Throughout the 1960s, her composing focused on sacred music - hymns and masses. One of the masses, Music for Peace, was choreographed and performed by the Alvin Ailey Dance Theater as "Mary Lou's Mass". She performed the revision of "Mary Lou's Mass" on television, on The Dick Cavett Show in 1971.

She wrote and performed religious jazz music such as Black Christ of the Andes (1963), a hymn in honor of the St. Martin de Porres; two short works, Anima Christi and Praise the Lord. In this period, Williams put much effort into working with youth choirs to perform her works, including mass at St. Patrick's Cathedral in New York City before a gathering of over three thousand. She set up a charitable organization and opened thrift stores in Harlem, directing the proceeds, along with ten percent of her own earnings, to musicians in need. As a 1964 Time article explained, "Mary Lou thinks of herself as a 'soul' player — a way of saying that she never strays far from melody and the blues, but deals sparingly in gospel harmony and rhythm. 'I am praying through my fingers when I play,' she says.'I get that good "soul sound", and I try to touch people's spirits.'"[7] She performed at the Monterey Jazz Festival in 1965, with a jazz festival group.

Throughout the 1970s, her career flourished, including numerous albums, including as solo pianist and commentator on the recorded The History of Jazz. She returned to the Monterey Jazz Festival in 1971. She could also be seen playing nightly in Greenwich Village at The Cookery, a new club run by her old boss from her Café Society days, Barney Josephson. That engagement too, was recorded.

She had a two-piano performance with avant-garde pianist Cecil Taylor at Carnegie Hall in 1977.

She accepted an appointment at Duke University as artist-in-residence (from 1977 to 1981), co-teaching the History of Jazz with Father Peter O'Brien and directing the Duke Jazz Ensemble. With a light teaching schedule, she also did many concert and festival appearances, conducted clinics with youth, and in 1978, performed at the White House. She participated in Benny Goodman's 40th-anniversary Carnegie Hall concert in 1978.

Her final recording, Solo Recital (Montreux Jazz Festival, 1978), three years before her death, had a medley encompassing spirituals, ragtime, blues and swing. Other highlights include Williams's reworkings of "Tea for Two", "Honeysuckle Rose", and her two compositions "Little Joe from Chicago", and "What's Your Story Morning Glory". Other tracks include "Medley: The Lord Is Heavy", "Old Fashion Blues", "Over the Rainbow", "Offertory Meditation", "Concerto Alone at Montreux", and "The Man I Love".

In 1981, Mary Lou Williams died of bladder cancer in Durham, North Carolina, aged 71. She was buried in the Roman Catholic Calvary Cemetery in Pittsburgh.[8] Looking back at the end of her life, Mary Lou Williams said, "I did it, didn't I? Through muck and mud."[9] She was known as "the first lady of the Jazz Keyboard". She was one of the first women to be successful in Jazz.[10]

This article uses material from the article Mary Lou Williams from the free encyclopedia Wikipedia and it is licensed under the GNU Free Documentation License.

Francis Poulenc Pavane und Complainte aus "Suite Française"
Update Required To play the media you will need to either update your browser to a recent version or update your Flash plugin.