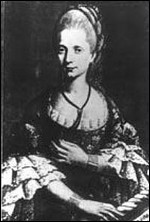 Marianna's paternal grandfather was a Spanish soldier who had settled in Naples. Her father, Nicolo Martines, grew up there and for a time pursued a career as a soldier. He later changed careers, serving in Vienna as Maestro di Camera (major-domo) at the papal nuncio; that is, the Pope's embassy to the Austrian Empire. For service to the Empire, Marianne's brothers in 1774 acquired a patent of nobility, hence the "von" in the family surname.[1]

In his youth in Italy, Nicolo had befriended the poet Pietro Trapassi, who wrote under the name Metastasio. The latter had risen in eminence, to the point that in 1730 he was called to Vienna to serve as the Poet Laureate of the Empire. Metastasio resided with the Martines family for the entire rest of his life (from about 1734 to 1782). His presence would prove crucial to Marianne's career.

The Martines family lived in rooms in a large building on the Michaelerplatz, "a stately building still standing in the Kohlmarkt."[2] As was common in the days before elevators, the floors of the building corresponded to the social class of the inhabitant. On the lowest floor were the rooms of the dowager princess of the wealthy Esterházy family. The Martines family were on third floor. Another resident of the middle floors was Nicola Porpora, a well-known Italian singing teacher and composer.[2] At the very top, in a cold and leaky attic room, lived a struggling young composer, Joseph Haydn, who was trying to make his way as a freelance musician. The lives of all of these people ultimately came to be connected, in part through Marianne.[3]

Marianna was born into this home in 1744. She was baptized Anna Catherina,[4] but chose to go by the name Marianna.[5].

Metastasio, the family friend, made it a practice to help out with the raising and careers of the Martines children; for instance, at one point he helped Giuseppe obtain an important job as custodian of the Imperial Library. In the case of Marianna, he noticed her precocious talents early, and thus came to oversee her education, musical and otherwise.

He first arranged for her to take keyboard lessons from Haydn, whom Metastasio had met as a result of their living in the same building. Then, at age ten, Marianne began singing lessons with Porpora, who had also met Haydn and taken him on as his assistant; Haydn played the harpsichord while Porpora taught Marianne.

Soon after Marianna began her music lessons she demonstrated a talent for composition, so she began still further lessons with Johann Adolph Hasse and the Imperial court composer Giuseppe Bonno.

Metastasio also saw to it that Marianna received a thorough general education, which far surpassed what was considered standard for women of her social class at that time. She was a native speaker of both Italian and German, and in an autobiographical letter to Padre Martini indicated that she had good command of French. The musicologist Charles Burney, visiting Vienna, found that she also could speak English.[6]

Career as performer and composer

A number of the works that Marianna composed are set for solo voice, and her biographers (Godt, Wessely) conjecture that the first singer of these works was their composer. If so, they constitute further evidence for her ability, as the music shows a "predilection for coloratura passages, leaps over wide intervals and trills indicat[ing] that she herself must have been an excellent singer." (Wessely).

Marianna wrote a number of secular cantatas and two oratorios to Italian texts. These texts are, naturally enough, the work of her mentor Metastasio.

Surviving compositions include four masses, six motets, and three litanies for choir. She wrote in the Italian style, as was typical for the early Classical period in Vienna. Her harpsichord performance practice was compared to the style of C.P.E. Bach. Mariannas compositions were well regarded in her time, and some scholars have suggested that Mozart modeled his 1768 Mass, K. 139, after the "Christe" of Martiness Mass No. 1 in D major. The Michaelerkirche (St. Michaels Church, next door to the Martines home), saw a performance of her third mass in 1761. Her fourth mass was completed in 1765.

Martiness name and music were known throughout Europe, and she was admitted to the Accademia Filarmonica of Bologna in 1773. In 1782 the Wiener Tonkünstlersozietät premiered Martiness oratorio "Isacco figura del redentore".

Marianne and her sister, neither of whom ever married, looked after their family friend Metastasio until his death in 1782. Upon his passing, Metastasio left his estate to the Martines family; Marianna received 20,000 florins, Metastasios harpsichord, and his music library. Marianna and her sister hosted musical soirees at their home. These weekly musical events attracted many distinguished guests, including Haydn and Irish tenor Michael Kelly. Mozart also was a frequent guest to the soirees and composed four-hand piano sonatas to perform with Marianne.

Though she was an active and highly accomplished performer and composer she never sought an appointed position; it would have been unacceptable for a woman in her social class to seek such employment.

Her last known public appearance was on March 27, 1808, attending a performance of Haydns oratorio The Creation conducted by Salieri, in tribute to the now-elderly composer. She died on 13 December 1812 and was buried in St. Marks Cemetery.

Several of her pieces have been published in recent years. The three keyboard sonatas (in E Major, G Major and A Major) are available through Hildegard Publishing. Many works are also available through Furore-Verlag, a German publisher that specializes in works by women composers. They offer many first publications, including: the Keyboard Concerto in A; Dixit Dominus for Soli, Choir and Orchestra; In Exitu Israel de Agypto, Psalm for Soli, Choir and Orchestra; Laudate Pueri Dominum, Psalm 112, for SATB choir and orchestra; the Fourth Mass.

This article uses material from the article Marianne von Martinez from the free encyclopedia Wikipedia and it is licensed under the GNU Free Documentation License.

Xaver Scharwenka Polnischer Tanz Nr.1 aus “Vier Polnische Tänze” op.58
Update Required To play the media you will need to either update your browser to a recent version or update your Flash plugin.