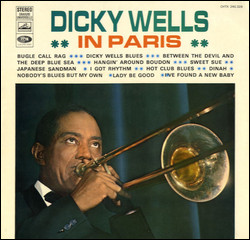 Dickie Wells was born in Centerville, Tennessee; his brother was trombonist Henry Wells. He moved to New York City in 1926, and became a member of the Lloyd Scott band.

In his later years, Wells suffered a severe beating that affected his memory, but he recovered and continued to perform. He played frequently at the West End jazz club at 116th and Broadway, most often with a band called The Countsmen, led by alto saxophonist Earle Warren, his colleague from Count Basie days. A trademark was Wells's "pepper pot" mute which he made himself.

He died on November 12, 1985, in New York City. Shortly after his death, Wells's family donated his trombone to Rutgers University.

Wells had two stints with Basie - 1937-42 and again after the war. His playing during the first was brilliant and established him as a major trombonist and influence on other trombonists. After he rejoined Basie his playing was insipid and uninspired, probably due to alcohol abuse. This same change in his playing is also evident in later recordings as a studio musician for Jimmy Rushing in the late 'fifties.

This article uses material from the article Dicky Wells from the free encyclopedia Wikipedia and it is licensed under the GNU Free Documentation License.