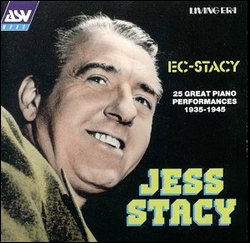 Jess Stacy (August 11, 1904 – January 1, 1995) was an American jazz pianist who gained prominence during the Swing era. He is perhaps best known for his years with the Benny Goodman band during the late 1930s, particularly his performance at Goodman's legendary Carnegie Hall concert in 1938.

By 1920 Stacy was playing piano in saxophonist Peg Meyers jazz ensemble at Cape Girardeau High School and at the Bluebird Confectionary on Broadway and Fountain and also at the Sweet Shop on Main Street. Originally labeled by schoolmates as "The Agony Four,"[3] "..... that band took them out of Cape Girardeau where, according to Stacy, 'everyone was square as a bear'".[4]

By 1921 the ensemble was known as Peg Meyer's Melody Kings and started touring the Mississippi River on 'The Majestic' and other riverboats.[5]

At some unknown date in the early 1920s Stacy moved 'upriver' to Chicago, Illinois, where he received notice performing with Paul Mares, leader of the New Orleans Rhythm Kings, playing a genre of jazz which came to be called Chicago-style. Stacy cites his main influences at the time as Louis Armstrong and, especially, pianist Earl Hines, pianist for both Louis Armstrong and the Carroll Dickerson band.[1] Stacy would frequently go to wherever Hines was playing and later played with Hines' band as 'relief piano player' in The Grand Terrace Cafe [as did Nat "King" Cole and Teddy Wilson] but during this time Stacy was mostly playing with Floyd Townes dance orchestra.

Stacys big break came in 1935 when Benny Goodman asked Stacy to join his band. Stacy left Floyd Towne, moved to New York, and spent the four years from 1935-1939 with the Benny Goodman Orchestra. He reached a personal peak when he performed with Goodman band at its famous 1938 Carnegie Hall jazz concert on 16 January 1938,[1] the first jazz concert ever played at the venue. The Carnegie Hall performance has gained legendary status, elevated in part by Stacy's unplanned piano solo during "Sing, Sing, Sing. Following a Goodman/Krupa duet, Stacy received a nod from Goodman to take a solo. Some believe that Stacy did not gain the recognition he rightly deserved because Teddy Wilson was the regular pianist for the Benny Goodman quartet, the most acclaimed of Goodman's bands.[6] Stacy did though play with such players as Bix Beiderbecke, Eddie Condon, Bud Freeman, George Gershwin, Lionel Hampton, Billie Holiday, Gene Krupa, Jack Teagarden and, later, Horace Heidt.

A 1939 review of 'Jess Stacy' (Commodore 1503) stated:
"These two five-minute blues are probably the finest solos ever recorded by Jess Stacy and the best coupling ever issued by Milt Gabler on his Commodore label. When this most sensitive, intelligent and polished of piano players goes to work in the simple, traditional blues form, the result is likely to be more individual than authentic; and that was the case here. On the slow blues, "EcStacy", and a faster one named "The Sell Out", Stacy has lavished all his musical sincerity, his harmonic invention and delicate melodic ideas, all performed with uniquely fine touch and really incisive phrasing. "EcStacy" is quiet, and the chords ring out like chimes; in "The Sell Out", Stacy's foot acts as bass drum and the swing is very easy and sure. Instead of the sterility which afflicts so many of the "advanced" jazz players, there is the sincere, personal emotion, and integrity, of a uniquely talented musician. Much intellect went into this music, and in places you can almost hear Jess' rapid thinking".[7]

After leaving the Goodman Orchestra, Stacy joined the Bob Crosby (Bing Crosby's brother) Orchestra and his famous small jazz group the Bob Crosby Bob-Cats. During his period with the latter band Stacy received yet wider acclaim. He won the national Down Beat piano polls in 1940,[8] 1941, 1942, and 1943.[9] Stacy would later be credited with revitalizing the dying band. When the Crosby band broke up, Stacy rejoined Goodman in 1942 for a short period before joining the Tommy Dorsey Orchestra.

Stacy spent six months with the Tommy Dorsey band. He then left to put together a big band of his own, named the Jess Stacy Band and recorded with vocalist Lee Wiley, to whom he was married. But by then "big band" music was losing popularity, and the band suffered financially. The band did not last long and Wiley and Stacy would later divorce.

In 1950 he moved to Los Angeles California.[10] As with many jazz 'stars', his career declined to mostly club work. Finally one evening, while working the piano bar in Leon's Steak House, Stacy walked out in the middle of a number after a drunken woman, while requesting the "Beer Barrel Polka" for the third time that evening, spilled a beer in his lap. Stacy declared that he was 'done' with the music business and he retired from public performances.[11]

Unusually for a 'jazzer', Stacy chose to leave the music industry and take regular jobs until he was able to retire. For a time Stacy worked as a salesman, then warehouseman, then postman, for Max Factor cosmetics.

Later, he would be "re-discovered" as fame of his past career became known. However Stacy was selective in his performances - he played for Nelson Riddle on the soundtrack of The Great Gatsby (1974). The same year as the film's release he was invited to play at the Newport Jazz Festival in New York and, as a result, was asked to record twice for the Chiaroscuro label, in 1974 and, in 1977, Stacy Still Swings. The years after that included compilations and some club work. Stacys final performance was broadcast on Marian McPartlands Piano Jazz for National Public Radio on December 1, 1981.[12] After his brief and 'selective' revival in the 1970s, Stacy again retired from the music scene and lived a quiet existence with his third wife, Patricia Peck Stacy.[13]

Stacy had a tumultuous love life as a young man. His first wife was Helen Robinson. Both were very young when they married in 1924. Stacy worked nights playing in clubs and slept during the day while Robinson worked days. She needed more security than Stacy was willing to provide, and Stacy was unwilling to work at a radio station in secure employment. This did not change when the couple had a child, Frederick Jess. The couple would later divorce and Robinson would go on to marry a friend of Stacy's, Phil Wing, the embodiment of all she had wanted Stacy to be.[14]

Stacy's second wife was the beautiful and wild Lee Wiley, a jazz singer of considerable acclaim at the time and subsequently. The couple was described by their friend Deane Kincaide as being as "compatible as two cats, tails tied together, hanging over a clothesline."[15] After being married less than three years, the couple divorced in 1948. Lee's response to Stacy's desire to get a divorce was, "What will Bing Crosby be thinking of you divorcing me?"[15] while Stacy said of Wiley, "They did not burn the last witch at Salem." Lee Wiley then married a retired business man, Nat Tischenkel, in 1966 and died of stomach cancer in 1975. Stacy did not attend her funeral.

Stacy's third wife was Patricia Peck. They had been friends and dating for a decade when they married on September 8, 1950. Stacy and Peck lived in Los Angeles and were married very happily for forty-five years.

Since his passing Stacy has gained new attention and honors. In 1996 he was inducted into the Big Band and Jazz Hall of Fame, and in 1998 a biography of him Jess Stacy: The Quiet Man of Jazz. a Biography and Discography was published.[16]

This article uses material from the article Jess Stacy from the free encyclopedia Wikipedia and it is licensed under the GNU Free Documentation License.

Amilcare Ponchielli Tanz der Stunden aus der Oper "La Gioconda"
Update Required To play the media you will need to either update your browser to a recent version or update your Flash plugin.