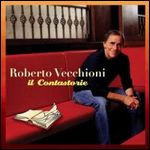 Vecchioni was born in Carate Brianza, province of Milan, to a family of Neapolitan origin. In 1968 he graduated in Classical Literature at the Catholic University of Milan, where he remained for two years as assistant lecturer of History of Religion. Later he become literature and history teacher in a Milanese High School, an activity that he continued during most of his career and that influenced several of his songs.

His career in the Italian music industry began in the late 1960s as songwriter for Italian pop stars including Ornella Vanoni, Gigliola Cinquetti, Mina, Iva Zanicchi. His first solo album was Parabola of 1971. In 1973 he took part in the Sanremo Festival with "L'uomo che si gioca il cielo a dadi", continuing to release works as singer-songwriter in the following years. His 1974 LP, Il re non si diverte, obtained the Best Year's Album Award from the Italian musical critics. In 1976 he published his first commercial success, Elisir, but he gained public recognition only in the following year, with Samarcanda. With this work Vecchioni was acclaimed as one of the most skillful italian singer-songwriters: his inspiration draws mainly from autobiographical themes, intermingled with dreamy, literary and historical (often mythological) ones. His friend Angelo Branduardi played violin on the LP.

Vecchioni's skills were confirmed in the following works, Calabuig, Stranamore e altri incidenti (1978), where the literary citations predominated, and in Robinson (come salvarsi la vita) (1979), where instead the autobiographical inspiration prevails. The songs "Signor giudice" and "Lettera da Marsala" of the latter work deal with the problems Vecchioni had had in the preceding years: respectively, a charge for marijuana possession (from which he was acquitted) and a dispute with his former record label. The following album, Montecristo, was released indeed by both the old and the new labels.

After Hollywood Hollywood of 1982, whose songs are influenced by the world of cinema, Vecchioni in 1984 released the double LP Il grande sogno ("The Great Dream"), in which he collected new songs together with new versions of his past hits. The title track featured Francesco De Gregori playing blues harp. The LP was accompanied by his first literary attempt, a short book with the same name. Many of the cover of Vecchioni's LPs of this period were created by the famous Italian comic book artist and painter Andrea Pazienza.

While continuing a successful career as a renowned singer-songwriter in the 1980s and the 1990s, Vecchioni spent more time writing. His prose includes the collection Viaggi nel tempo immobile (1996) and the novels Le parole non portano le cicogne (2000) and Il libraio di Selinunte. He also lectured on the History of Italian Songwriting in a tour lasting two years, and was called to author the Enciclopedia Treccani article about Italian singer-songwriters. His best more recent works include Sogna ragazzo sogna ("Dream, boy, dream") of 1999 and Il lanciatore di coltelli ("The Knife Thrower") of 2002.

This article uses material from the article Roberto Vecchioni from the free encyclopedia Wikipedia and it is licensed under the GNU Free Documentation License.