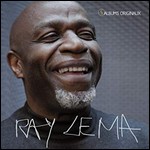 born in 1946 in Lufutoto, Congo, the democratic Republic of the

Raymond Lema A'nsi Nzinga, known as Ray Lema, is a Congolese (DRC) musician, born 30 March 1946 in Lufu-Toto, Bas-Congo Province. Lema is a pianist, guitarist, and songwriter. He worked for the National Ballet of Zaire, as it was then called, and in 1979 was invited to the United States by the Rockefeller Foundation. By 1989 he had international success signing with Island Records.[1]

His initial training had been European classical music at a Catholic seminary where he had been planning to become a priest. His concert debut was Moonlight Sonata, but later he left the seminary and became interested in popular music from outside Africa. He became a performer in clubs and was a fan of musicians like Jimi Hendrix. This was not entirely approved of in the Congolese music of that time. He later went to the United States and Europe, settling in Paris. He has also become a figure in world music.[2] He has also done work as a film composer.[3]

Lema appears as a vocalist (and composer on three tracks) on Stewart Copeland's 1985 album, The Rhythmatist.[4]

This article uses material from the article Ray Lema from the free encyclopedia Wikipedia and it is licensed under the GNU Free Documentation License.