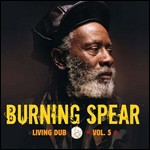 Winston Rodney OD (born 1 March 1945), better known by the stage name Burning Spear, is a Jamaican roots reggae singer and musician. Burning Spear is a Rastafarian and one of the most influential and long-standing roots artists to emerge from the 1970s.[1][2]

Winston Rodney was born in Saint Ann's Bay, Saint Ann, Jamaica. As a young man he listened to the R&B, Soul and Jazz music transmitted by the US radio stations whose broadcasts reached Jamaica. Curtis Mayfield is cited by Rodney as a major US musical influence along with James Brown.[3] Rodney was deeply influenced as a young man by the views of the political activist Marcus Garvey especially with regard to the exploration of the themes of Pan-Africanism and self-determination.[3] In 1969, Bob Marley, who was also from Saint Ann, advised Rodney to approach Coxsone Dodd's Studio One label after Rodney sought his advice during a casual conversation.[4][4][5][6]

Burning Spear was originally Rodney's group, named after a military award given by Jomo Kenyatta, the first Prime Minister and President of an independent Kenya,[7] and including bass singer Rupert Willington. The duo auditioned for Dodd in 1969 which led to the release of their debut single "Door Peep" (the session also included Cedric Brooks on saxophone).[4][8] They were then joined by tenor Delroy Hinds. The trio recorded several more singles for Dodd, and two albums, before they moved on to work with Jack Ruby in 1975.[4] Their first recording with Ruby, "Marcus Garvey", was intended as an exclusive track for Ruby's Ocho Riosbased Hi-Power sound system, but was released as a single, giving them an immediate hit, and was followed by "Slavery Days".[4] These recordings featured the backing band The Black Disciples, which included Earl "Chinna" Smith, Valentine Chin, Robbie Shakespeare and Leroy Wallace.[4] The group worked with Ruby on their third album, Marcus Garvey (1975), which was immediately successful and led to a deal with Island Records to give the album a wider release.[4] Island remixed and altered the speed of some of the tracks, much to the annoyance of fans and the group,[9] leading Rodney to set up his own Burning Music[10] label for future releases where he would have full control, although further releases followed on Island including Garvey's Ghost, a dub album, and the Man in the Hills album.[4] In late 1976, Rodney split from both Ruby and group members Willington and Hinds, and from that point on used the name Burning Spear for himself alone. Dry and Heavy followed in 1977, self-produced but still on Island, and with a sizeable following by now in the United Kingdom,[9] he performed in London that year with members of Aswad acting as his backing band for a sold-out show at the Rainbow Theatre, which was recorded and released as Live!.[4] Aswad also provided backing on his next studio album, Social Living (1978), which also featured Sly Dunbar and Rico Rodriguez.[4] A dub version of the album, Living Dub (1979), was mixed by Sylvan Morris.[4] His profile was raised further by an appearance in the film Rockers, performing "Jah no Dead".[9]

In 1980, Rodney left Island Records and set up the Burning Music Production Company,[11][12] which he signed to EMI,[9] debuting on the label with Hail H.I.M., recorded at Marley's Tuff Gong studio and co-produced by Aston Barrett.[4] A Sylvan Morris dub version followed in the form of Living Dub Volume Two.[4] In 1982, Rodney signed with Heartbeat Records with a series of well-received albums following, including the 1985 Grammy-nominated Resistance.[4] He returned to Island in the early 1990s, releasing two albums before rejoining Heartbeat. This arrangement in which Burning Music Productions delivered completed albums of music to EMI, Island and Heartbeat Records for worldwide distribution lasted for many years. When Heartbeat ceased releasing new material, Burning Music took matters into their own hands and began to release music solely through their own imprint.[13] Albums released by Heartbeat through an agreement with Burning Music include: The World Should Know (1993), Rasta Business (1995), Appointment with His Majesty (1997) and the Grammy award winning Calling Rastafari (1999) which was the last completed album to be solely pressed by an outside label.

Burning Spear spent decades touring extensively, and several live albums have been issued including Burning Spear Live, Live in Paris, Live in South Africa, Live in Vermont, Peace and Love Live, Live at Montreux Jazz Festival and (A)live 1997.[14] As the years passed, Burning Spears music continued to restlessly grow and expand. Touring the world time and time again, the bands live sound matured and grew more sophisticated. While remaining firmly rooted in reggae, accents of free jazz, funk and psychedelic music were increasingly in evidence and made the group a musical force to be reckoned with.[15]

In 1980,[17] Rodney set up the Burning Music Production company, handling his own bookings, and in 2002, he and his wife, Sonia Rodney who has produced a number of his albums, restarted Burning Music Records, giving him a greater degree of artistic control.[5][18][19] Since the mid-1990s, he has been based in Queens, New York.[20]

Burning Spear was awarded the Order of Distinction in the rank of Officer on 15 October 2007.[21]

His 2008 studio album, Jah is Real won the Grammy Award in 2009 for best reggae album. It was the third completely self-produced and independent CD released on the Burning Music label. The two previous CDs were the Grammy nominated Freeman from 2003 and Our Music which was released in 2005 to critical acclaim.[22]

Since establishing their own label, Winston and Sonia Rodney have released nearly forty singles, CDs, DVDs and vinyl albums on the Burning Music imprint.[17] Many of these albums have been deluxe editions of albums previously available on other labels and often include bonus tracks and DVD footage.[23][24] In this way, Burning Music is able to assure the quality of the Burning Spear music available in the market and guarantee that music from all phases of Burning Spear's career is available for his listeners to hear.

Burning Spear has recently completed a new CD No Destroyer that will be released soon on the Burning Music Imprint.[25][26]

Winston and Sonia Rodney have been shooting, editing, and compiling a documentary, I-Man; about the life, music, and influence of Burning Spear for the past several years now.[27] When asked about when it will be completed, Winston Rodney confesses to being in no hurry, and assures his fans that the movie will be released 'when the time is right.'[28]

Burning Spear has won two Grammy Awards for Best Reggae Album; one at the 42nd Grammy Awards in 2000 for Calling Rastafari, and one for 2009's Jah Is Real. He has been nominated for a total of 12 Grammy Awards.[19][29]

This article uses material from the article Burning Spear from the free encyclopedia Wikipedia and it is licensed under the GNU Free Documentation License.