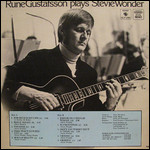 Rune at the Top was published in 1969 and included the Norwegian drummer Jon Christensen. He played in the Arne Domnérus duo (Dialog, 1972) and his various orchestras, with Jan Johansson, Georg Riedel, Cornelis Vreeswijk. Rune Gustafsson Himself Plays Gilbert O'Sullivan (1973), Killing Me Softly (1973) and Move (1977), was recorded with Egil Johansen, who was one of Gustafsson's most popular jazz partners. On a Clear Day (Sonet, SLP 2581, 1976) included Red Mitchell and Duke Ellington's drummer Ed Thigpen. He played with Zoot Sims on two recordings: The Sweetest Sounds and In a Sentimental Mood, the latter was Sims last album.

Rune Gustafsson died in 2012 in Stockholm after short illness.[5]

Gustafsson received the Albin Hagstrom Memorial Price in 1997, The Thore Ehrling scholarship in 2001, and Guitar People's Prize in 2004. In 2009 he was awarded the Lars Gullin Award, for having been "the trend for young guitarists in Sweden and abroad".[6] In 2010 he was awarded the Monica Zetterlund memorial fund scolarship.[7]

This article uses material from the article Rune Gustafsson from the free encyclopedia Wikipedia and it is licensed under the GNU Free Documentation License.