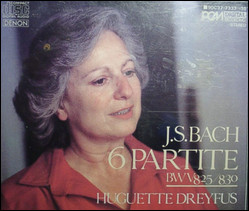 Huguette Dreyfus is a French harpsichordist born on November 30, 1928 in Mulhouse, Alsace, France.

Huguette Dreyfus began taking piano lessons at four years old. In 1946, she began working with renowned piano teacher Lazare Lévy. In 1950, having learned that music historian Norbert Dufourcq was to give special classes on the music of Johann Sebastian Bach (in recognition of the bicentennial of Bach's death) at the Conservatoire de Paris, she entered into the class and remained there for four years. In addition to her piano class, she also studied the harpsichord at the Académie Chigiana de Siena under Ruggero Gerlin who, himself, was a student of harpsichord-reviver Wanda Landowska. Years later, in 1958, Dreyfus won the Geneva international harpsichord competition, becoming a prominent figure of ancient Renaissance and Baroque music and of the revival of the harpsichord in France.

Dreyfus taught at the Schola Cantorum, at the Sorbonne in Paris, and at the National conservatory of music and dance of Lyon(CNSMD de Lyon). She taught as well as part of the International Academy of Organ and old music of Saint-Maxima-la-Sainte-Baume, and at the Villecroze Academie de Musique. In this regard, the quality and the significant number of harpsichordists who identify with her teaching, such as Christophe Rousset, Olivier Beaumont, Yannick Le Gaillard, Noëlle Spieth, and Jory Vinikour speaks for itself. She is part of the jury of the International Harpsichord Competition of Paris.

The content of this article originally comes from the equivalent article in the French Wikipédia.

This article uses material from the article Huguette Dreyfus from the free encyclopedia Wikipedia and it is licensed under the GNU Free Documentation License.

Franz Schubert Andante aus dem Oktett F-Dur D 803 op. posth. 166
Update Required To play the media you will need to either update your browser to a recent version or update your Flash plugin.