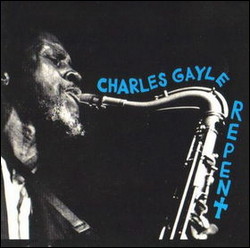 Charles Gayle was born in Buffalo, New York.[2] Some of his history has been unclear due to his reluctance to talk about his life in interviews.[3][4] He briefly taught music at the University at Buffalo before relocating to New York City during the early 1970s.[4]

Gayle was homeless for approximately twenty years, playing saxophone on street corners and subway platforms around New York City.[2][3][4][5][6] He has described making a conscious decision to become homeless: "I had to shed my history, my life, everything had to stop right there, and if you live through this, good, and if you don't, you don't. I can't do the rent, the odd jobs, the little rooms, scratchin', and all that, no!"[4] At the same time, this allowed Gayle to devote most of his time to playing music, although he often earned less than US$3 a day from busking:

First of all, I played to play because I need to play. Second of all, the money, a dollar meant a lot to me at that time. Playing out there is obviously different than playing on a stage but that is so rich out there. It's such a whole 'nother world of playin'. I mean I used to walk from Times Square, for instance, all the way to Wall Street playin'. I could walk back and never stop playing. I didn't think about it as anything other than what it was. These were people and I wasn't overly concerned with what they thought. I was playing, I had to play. Also I had to eat some way and I'm not the type to put my hand out. I'd stand there playing with a coffee cup sometime and people would put money in my coffee [Laughs] and you don't get that on the stage. That's beautiful.[4]

When Gayle first set out on the streets, he did not imagine he would remain homeless as long as he did, although he estimates that this period lasted closer to fifteen years than twenty.[4]

In 1988, he gained fame through a trio of albums all recorded in one week by a Swedish label, Silkheart Records.[4] Since then he has become a major figure in free jazz, recording for labels including Black Saint, Knitting Factory Records, FMP, and Clean Feed. He has also taught music at Bennington College.

Gayle's music is spiritual,[6] and heavily inspired by the Old and New Testaments. Gayle explains, "I want the people to enjoy the music and if it, in anyway can suggest something about the Lord, for their benefit, that would be first in my mind."[4] He has explicitly dedicated several albums to God. His childhood was influenced by religion, and his musical roots trace to black gospel music. He has performed and recorded with Cecil Taylor, William Parker, and Rashied Ali.

Gayle's most celebrated work to date remains the album Touchin' on Trane (FMP) with Parker and Ali. Though he established his reputation primarily as a tenor saxophonist, he has increasingly turned to other instruments, notably the piano (which was, in fact, his original instrument) and alto saxophone. More controversially, he has sometimes included lengthy spoken-word addresses to the audience in his concerts touching on his political and religious beliefs: "I understand that when you start speaking about faith or religion, they want you to keep it in a box, but I'm not going to do that. Not because I'm taking advantage of being a musician, I'm the same everywhere, and people have to understand that."[4] Gayle sometimes performs as a mime, "Streets the Clown." "Streets means to me, first, a freedom from Charles. I'm not good at being the center of attention. It's a liberation from Charles, even though it's me on the stage, it's a different person."[4]

In 2001, Gayle recorded an album entitled Jazz Solo Piano. It consisted mostly of straightforward jazz standards, and is a response to critics who charge that free jazz musicians cannot play bebop. In 2006, Gayle followed up with a second album of solo piano, this time featuring original material, entitled Time Zones.

This article uses material from the article Charles Gayle from the free encyclopedia Wikipedia and it is licensed under the GNU Free Documentation License.

Franz von Suppé Coletta-Walzer
Update Required To play the media you will need to either update your browser to a recent version or update your Flash plugin.