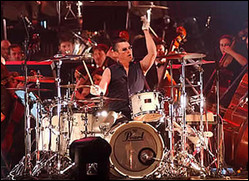 Jon Farriss was born to Dennis and Jill Farriss, and is the second youngest of four children: brothers and fellow band members Andrew and Tim, and younger sister Alison,[1] and was the youngest member of INXS until J.D. Fortune joined on lead vocals.

Farriss is known for integrating traditional rock drums with more funk and Dance influenced beats as well as acoustic drums and sequencers and pads. Examples of these techniques can be found in such songs as "Need You Tonight" and "The Stairs".

Farriss has also been credited with backing vocals on many of the band's earlier albums. Among his song writing credits with INXS (mostly collaborations with Michael Hutchence) are "Red Red Sun," "The Gift," "Deepest Red", "Faith In Each Other," "Back On Line," "Never Let You Go" (with Fortune) and the hit "Disappear".

Farriss auditioned to be in the band Guiness with future INXS band-mates Kirk Pengilly and brother Tim, but was rejected for being only nine years old at the time.[2] His first band was playing with a Christian choral group at age 11.[3] He played with bands such as Top Kat,[1] Blackwater, and Fish.[4]

Farriss is credited as "Jazzy Jonny J" on Tim Farriss' album Deep Inside, a compilation of samples. He wrote and performed the song "You Never Used to Cry" on the soundtrack for the 1984 film No Small Affair.

Like his brother Tim, Jon suffers from hereditary multiple exostoses.

He was formerly married to the actress Leslie Bega from 14 February 1992 to 1999. After the death of his mother Jill in 1995, separation from Bega and loss of his "inseparable friend" Michael Hutchence (with whom he once shared an apartment in Hong Kong) and finally painful knee surgery Farriss suffered from a nervous breakdown, fueled by alcohol and drugs.[4]

In 2006, he married his long-time girlfriend Kerry Norris in a small beach-side ceremony in Jervis Bay, followed by a party at their home in Hyams Beach. The couple's first child, Avani Jillian, was born on 6 October 2008.[5] Their son Danan James was born on 15 November 2010 and was announced on INXS Facebook page.

This article uses material from the article Jon Farriss from the free encyclopedia Wikipedia and it is licensed under the GNU Free Documentation License.