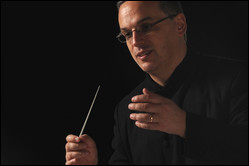 In his youth, Sanderling played the piano and clarinet. His early university experience was in Halle, Germany. At the Los Angeles Philharmonic Institute, Sanderling studied with the conductors Leonard Slatkin, Yuri Temirkanov, Edo de Waart and John Nelson. He later attended the University of Southern California Thornton School of Music and studied with Daniel Lewis. He also studied with Kurt Masur at the Leipzig conservatory.

Sanderling's first professional position was in Potsdam, Germany. In addition, he has been the Music Director of the Staatstheater and the Philharmonisches Staatsorchester Mainz (Philharmonic Orchestra). In 1996, he became chief conductor of the Orchestre de Bretagne and served in this capacity until the end of the 2003-2004 season.

Sanderling is married to the cellist Isabelle Besançon, who formerly played in the Orchestre de Bretagne, where they met. They were married in November 2002. On 31 December 2002, there was an incident at the Raymond James Stadium where the couple was supposed to meet the Tampa businessman David Harbert at an American football game, as guests. A security guard stopped Besançon from entering the stadium because of her oversized purse, a consequence of heightened security concerns after the 11 September 2001 attacks. The incident escalated because a security guard was reported to have stated that he "couldn't risk letting the couple inside because they were foreigners". The matter resolved in a letter of apology from Barbara Casey, director of communications for the Tampa Sports Authority, to Sanderling.[13]

In September 2015, Sanderling was named the next chief conductor of the Liechtenstein Symphony Orchestra, effective with the 2016-2017 season.[14]

This article uses material from the article Stefan Sanderling from the free encyclopedia Wikipedia and it is licensed under the GNU Free Documentation License.