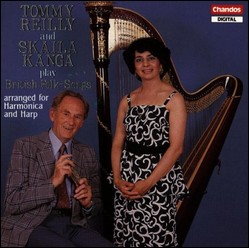 In 1977, Tommy Reilly and Skaila formed a duo for harmonica and harp which lasted 22 years. They performed in concert and on television throughout Britain, Europe and South America, recording on the Chandos Records, the label for whom Skaila also recorded all the major French chamber music repertoire with the Academy of St. Martin's in the Fields Chamber Ensemble, as well as Mozart's Concerto for flute and harp with Susan Milan, Richard Hickox and the City of London Sinfonia.

Legend of Bhagat Singh, Life of David Gale, The Four Feathers, Die Another Day, The 25th Hour, Ghost Ship, Nicholas Nickleby, Cold Mountain, Troy, Shrek 2, Bridget Jones, Shark Tale, Alfie, Enduring Love, Sahara, Batman Begins, Fragile, Charlie and the Chocolate Factory, Hitchhiker's Guide to the Galaxy, The Constant Gardener, The Da Vinci Code, Harry Potter, The Mummy Returns, The Hole, Chocolat, End Game, Crush, The Others, Sacrifice, Possession, From Hell, Return to Neverland, Before You Go, The Time Machine, The Guru, The Shipping News, The Truth About Charlie, We Were Soldiers, Talk To Her, Ararat, Simon, 101 Dalmatians 2, Swept Away, The Hours, Les Misérables, How to Train Your Dragon 2

(Published by ALAW and included in the Lyon and Healy catalogue)

This article uses material from the article Skaila Kanga from the free encyclopedia Wikipedia and it is licensed under the GNU Free Documentation License.

Antonio Rosetti Allegro molto aus dem Violinkonzert D-Dur
Update Required To play the media you will need to either update your browser to a recent version or update your Flash plugin.