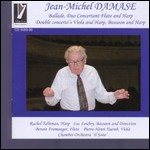 Damase was born in Bordeaux, the son of harpist Micheline Kahn.[2] He was studying with Marcel Samuel-Rousseau at the age of five and composing by age nine.[3] He was admitted to the Conservatoire de Paris in 1940, studying with Alfred Cortot for piano, and won first prize for piano in 1943,[3] afterwards studying with Henri Büsser, Marcel Dupré and Claude Delvincourt for composition[3] - winning his first prize for composition in 1947, in which year he won the Grand Prix de Rome[4] (In this year he wrote his trio for flute, viola and harp which has several times been recorded.)

He made the first complete recording of Gabriel Fauré's nocturnes and barcarolles, for which he received the Grand Prix du Disque.[5]

This article uses material from the article Jean-Michel Damase from the free encyclopedia Wikipedia and it is licensed under the GNU Free Documentation License.