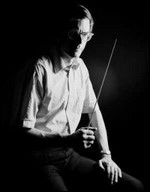 Hilary Davan Wetton was educated at Westminster School and Oxford University. He has married three times, in 1964 to Elizabeth Tayler and in 1989 to Alison Kelly. He is currently married to Professor Tonia L Vincent with whom he has one daughter.

Davan Wetton is Musical Director of three amateur choirs (the City of London Choir, the Hastings Philharmonic Choir and the Surrey Festival Choir). He is Conductor Emeritus of the Milton Keynes City Orchestra (of which he was founding conductor) and of the Guildford Choral Society which he conducted from 1968 - 2008. He has made a number of acclaimed recordings with the Guildford Choral Society, the Holst Singers, the London Philharmonic and the Milton Keynes Orchestras.

Hilary Davan Wetton has had a long career as a conductor and teacher. He was Director of Music at Cranleigh School, St Paul's Girls School and Tonbridge School, and has conducted some of the leading British youth orchestras. He also has a continuing association with the National Children's Orchestra.

He appears frequently as a guest conductor with choirs and orchestras both in Britain and overseas, and has performed regularly on Radio 3.

He has been awarded honorary degrees by the Open University (MA) and de Montfort University (DMus).

This article uses material from the article Hilary Davan Wetton from the free encyclopedia Wikipedia and it is licensed under the GNU Free Documentation License.

Felix Mendelssohn-Bartholdy Violinkonzert in d-Moll
Update Required To play the media you will need to either update your browser to a recent version or update your Flash plugin.