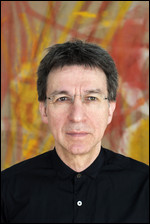 Eivind Aadland (born 19 September 1956) is a Norwegian conductor and violinist. He has been concert master of the Bergen Philharmonic Orchestra.[1]

Eivind was Chief Conductor and Artistic Leader of the Trondheim Symphony Orchestra from 2004-2010, and maintains a regular relationship with many Scandinavian orchestras, including the Oslo and Bergen Philharmonics, Stavanger Symphony and Swedish Chamber Orchestra. At Den Norske Opera in Oslo he has conducted productions of Don Giovanni, Le nozze di Figaro, Die Zauberflöte and Die Fledermaus.

Mr. Aadland’s recording output encompasses a diverse range of repertoire and he is a champion of Norwegian and Swedish composers. These include the symphonic works of Eivind Groven, a disc of Norwegian orchestral favourites and the complete music for violin and orchestra of Arne Nordheim with the Stavanger Symphony – all for BIS records. On the Simax label Aadland he has made discs of Irgens Jensen's works with the Bergen Philharmonic, music of Ole Bull with the Trondheim Symphony and music of Gustav Holst, Percy Grainger and Florent Schmitt with The staff band of the Norwegian Armed Forces. Also with the Trondheim Symphony he has recorded two discs devoted to the orchestral music of Ludwig Irgens-Jensen and Gerhard Schjeldrup for CPO Records. He has also recorded for Hyperion, ASV, IMP Classics, and Koch. A student of Jorma Panula, Eivind Aadland was encouraged by Mariss Jansons to pursue his conducting career. Previously as a violinist, Eivind Aadland was concertmaster of the Bergen Philharmonic (1981–1989) and Music Director of the European Union Chamber Orchestra during 1987–1997, with whom he directed concerts at concert halls and festivals throughout Europe, and made a number of recordings. Mr. Aadland studied with Yehudi Menhuin and together they performed chamber concerts in Paris and London as well as in Switzerland.[2][3]

This article uses material from the article Eivind Aadland from the free encyclopedia Wikipedia and it is licensed under the GNU Free Documentation License.