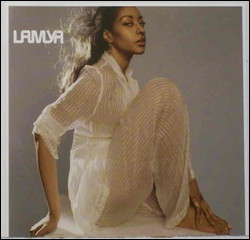 Lamya Al-Mugheiry (1973 - January 8, 2009), better known as her mononym Lamya was a Kenyan-born British female R&B and dance music singer. She was born in Kenya and was of Omani descent and raised in Sheffield, United Kingdom. A remix of her song "Empires" hit #1 on the Hot Dance Music/Club Play chart in 2002.

Aged just 16, Lamya sang lead vocals on "Ready 4 Love" by DJ Vaughn Mason (under the guise 'Razette'), an answer track to the single "Break 4 Love" by Raze, previously a hit in 1988. Lamya's version reached no. 77 in the UK Charts in August 1989. Soon afterwards, she was chosen to perform lead vocals for Soul II Soul on the tracks "Love Come Through" and "In the Heat of the Night", from their second album Vol. II: 1990 - A New Decade. In 1993, she joined Duran Duran for their two-year Wedding Album tour, and related television appearances, including MTV Unplugged. She also performed with David Bowie and James Brown.

In 2002, Lamya released her first and only album, Learning from Falling. She produced and composed the songs, using poems she had written since the age of eleven. It included the singles "Empires (Bring Me Men)" (for which a video was filmed) and "Black Mona Lisa".[1] In its review of the album, Blender described her as "the Kenyan Björk".[2] In 2003 she toured (as opening act) with Macy Gray.[3][4]

Lamya was scheduled to release her second album, Hiding in Plain Sight in 2009, but died of a sudden and unexpected heart attack on 8 January 2009, while in Oman. She was only 35.[5][6]

This article uses material from the article Lamya from the free encyclopedia Wikipedia and it is licensed under the GNU Free Documentation License.