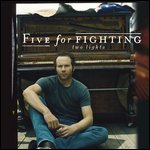 Ondrasik was born in Los Angeles, a child of a musical family. In his early years, he learned the piano; and, in his teens, he learned to play the guitar and started to write music. While he also learned to sing opera briefly, he soon decided that he would like to be a singer and songwriter. Ondrasik graduated from UCLA with a degree in applied science and mathematics.

While in college, Ondrasik continued to pursue music in his spare time. He adopted the name "Five for Fighting", an ice hockey term that means a five-minute major penalty for participating in a fight. Ondrasik is a lifelong fan of the National Hockey League's Los Angeles Kings.

Ondrasik's first album, Message for Albert, was released by EMI in 1997. Capitol Records then re-released this album after the success of America Town.

Originally, Aware Records' Mark Cunningham was a big fan of Five for Fighting and made initial contact with Ondrasik.[3] Cunningham then passed Ondrasik's demos to the label's new A&R Steve Smith.[3] Smith loved the recordings and after a discussion with Aware head Gregg Latterman, they met with Ondrasik and set up a deal shortly afterwards in partnership with Columbia Records.[3]

His second album, America Town, was released on September 26, 2000. The album had impact, but specifically "Superman (It's Not Easy)" was a commercial success, reaching number 14 on the Billboard Hot 100 chart. The hit single eventually became an anthem after the September 11 attacks where Ondrasik went on to perform the song at The Concert for New York City in late 2001. While America Town did not reach the top 50 of the Billboard 200 chart, the album's first single, "Easy Tonight", became a number one Triple A song and consistent album sales eventually led to it being certified Platinum.

Two years later, the album Two Lights was released; this became his first career top 10 album, debuting at number eight on the Billboard 200 chart in August 2006. It's first single, "The Riddle", became Ondrasik's third career top 40 hit on the Billboard Hot 100 chart, peaking at number 40. It reached number three on AC charts and number seven on Hot AC charts. The second single, "World", reached number 14 on Hot AC charts and the music video has been used to raise funds for various charities and as a theme for NASA's International Space Station (see Philanthropy below).

His fifth studio album, titled Slice, was released on October 13, 2009, and appeared on the iTunes top 10 albums on the first day. The album was produced by Gregg Wattenberg ("Superman," "100 Years"). Academy Award-winning composer Stephen Schwartz, who penned the songs for musicals such as Wicked, Godspell and Pippin, co-wrote the title track, as well as the track "Above the Timberline." On July 21, 2009, the first single from Slice, called "Chances", was released for digital download. "Chances" was featured at the end title of the hit movie The Blind Side. "Chances" reached number 11 on the Hot AC radio chart.

On May 27, 2010, Ondrasik announced that he had left Columbia Records and his album Slice would be re-released on Wind-up Records along with the song "Slice" being released as a single in July 2010.[5]

On February 20, 2011, Five for Fighting performed at the 2011 NHL Heritage Classic in Calgary, with the Calgary Flames facing off against the Montreal Canadiens.[6]

He has twice collaborated with Sandra Boynton, recording a song each for her Dog Train book and CD in 2005, and her Blue Moo album in 2007.

With over 2.5 million albums sold and America Town and The Battle for Everything, both achieving Platinum status, Ondrasik continues to write and perform, even writing and co-writing music for other artists, including the Backstreet Boys and Josh Groban. He has also contributed to movie soundtracks such as August Rush, We Were Soldiers, Chicken Little, and Everyone's Hero, and in 2008, Ondrasik wrote and recorded the song "Brothers in Arms" for the award-winning documentary film Brothers at War.

In May 2012, Ondrasik stated in a news update on Five for Fighting's official website that he would spend the summer writing new music for his next album, expected in 2013, as well as continuing to write articles for the Los Angeles Kings.[5] On June 6, 2013, Ondrasik announced that his sixth album called Bookmarks would be released on September 17, 2013 and that the first single off the album would be called "What If", released on June 11, 2013.

Ondrasik wrote and recorded the original song "All for One" for the one hundredth episode of the television series Hawaii Five-0.[7] The song was released as a single on November 7, 2014, the same date the episode aired. His song "100 Years" was featured in the final scene of the final episode of the TV series JAG.

On September 12, 2016, Five for Fighting released the single "Born to Win." The song debuted during the opening montage of the season eight finale of American Ninja Warrior.[8]

Five for Fighting performed as part of the famed Lincoln Center Series, American Songbook, in February 2017. [9] They also performed their song "All for One" at the National Memorial Day Concert on the steps of the Capitol in 2017. [10]

Ondrasik is the featured artist in season three of the CBS drama Code Black. Contributing his take on Gary Go's "Open Arms" in episode one. He also appears on screen performing the song.

In 2012, Ondrasik became active on the public speaking circuit. Presenting on themes of creativity, entrepreneurship, and collaboration, Ondrasik uses his music, life as a musician and working in the family business to highlight his message. He has presented at TedX,[11] The Salk Institute,[12] American Cancer Society, and Virgin Unite amongst others.

In the spring of 2007, Ondrasik created the first video charity website.[13] The website allowed fans to upload videos answering the central question, "What Kind of World do You Want?" (taken from his hit song, "World"). The site raised over $250,000 for Augie's Quest, Autism Speaks,[14] Fisher House Foundation,[15] Save the Children,[16] and Operation Homefront.[15]

Ondrasik, under the auspices of the USO, performed for service members on a USO/Armed Forces Entertainment tour of Guantanamo Bay and other bases in Cuba in February and March 2007. He followed up with another USO tour in November 2007 of Japan, Guam and Hawaii. "I am struck by the sacrifices the troops and their families make for our way of life and I felt it was important to show my support," says Ondrasik.

In November 2007, Ondrasik coordinated the release of 13 free songs for US military members called CD for the Troops. There have been five CDs for the troops and over one million copies given away. The songs donated included tracks from Billy Joel, Jewel and Sarah McLachlan. Subsequent volumes became available in 2008 (including songs by Gretchen Wilson, Keith Urban and Trace Adkins), 2009 (an album of comedy tracks with material from comedians such as Chris Rock, Ray Romano and Adam Sandler),[17] 2010 (featuring songs by Matchbox 20, Brandi Carlile, Ingrid Michaelson, and Gavin DeGraw), and 2011 artists including Sara Bareilles, Mayday Parade and REO Speedwagon.

In 2008, he got involved in the musical movement of spreading awareness about current slavery and human trafficking by performing a live version of "World" for the rockumentary, Call + Response.[18]

The song "What If" was used in the tenth Anniversary Campaign[19] of Richard Branson's non-profit, Virgin Unite.

The singer received a special fatherhood award from the National Fatherhood Initiative's 2009 Military Fatherhood Award Ceremony.[20] He received the ISPA's Humanitarian Award in 2016.[21]

Ondrasik currently lives with his wife and their two children near Los Angeles, California. He is an avid hockey and basketball fan, supporting the L.A. Kings and Lakers.[22] He has been a contributing writer for both Sports Illustrated and the official L.A. Kings and is often featured on radio and TV interviews.[23] He has performed on Sports Center, at the 2002 NHL All-Star game, 9/11/11 Jets v. Cowboys Halftime, 2011 Heritage Classic, 2011 Carrier Classic, 2014 Stadium Series in Los Angeles, and performed "100 Years" during Landon Donovan's last game of the LA Galaxy.

Ondrasik is a political conservative, and was a registered Republican, until 2016. Due to his distaste for the 2016 GOP nominee, political outsider and real estate mogul, Donald Trump, he announced on his Twitter account that he had switched to Independent.[24]

This article uses material from the article Five for Fighting from the free encyclopedia Wikipedia and it is licensed under the GNU Free Documentation License.