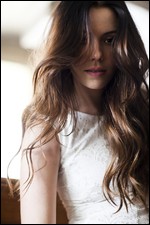 Marion Elise Ravn (born May 25, 1984), known as Marion Raven, is a Norwegian singer and songwriter. Raven formed the pop duo M2M with Marit Larsen, though they ceased performing together in 2002. Raven was later signed as a solo artist by Atlantic Records with the release of her solo debut album, Here I Am in 2005. In 2006, Raven was signed to the indie record label, Eleven Seven, and in 2007 re-released the songs on her debut album along with a few new songs on an album titled Set Me Free. In 2012, Raven began production of her second album, Songs from a Blackbird, which was released in Norway on 8 April 2013.

Raven has also written tracks for other artists such as Pixie Lott. She has also lent her voice to the Norwegian version of Tangled. Raven married professional Anthony Wickersham in 2010 and separated in 2017.

Raven was born in Lørenskog, Norway; her father is a teacher. She has an older brother and two younger sisters.[1] Her surname is of Norse origin, with Ravn meaning Raven, which she adopted as her stage name Marion Raven as well as her trademark raven logo. Raven enjoyed singing from a young age, sometimes writing lyrics for the songs she sang. Raven joined the gospel choir in a local church at the age of 5. At age 7, she went on to be part of the St. Laurentius choir, which has many historical links in Lørenskog, and was started in 1965 by, and is still being run by her vocal coach for several years, Kjell Walther Christensen. By the time she was eight, Raven began playing the piano and took piano lessons from Sif Anna Lisa Ødegård, married to Kjell Walther Christensen. She also attended ballet lessons, as well as performing ballet on stage. In 1993, she acted in the musical "Sound of Music", on the "Norwegian Broadway". She recorded a children's musical titled, "Vettene Vinner" (Vettene Wins), with the musical group, "Vettene", meaning "small trolls that protect nature", and was part of the group's record "Vettene på gamlespor" (Vettene on Old Tracks). At age 10, Raven acted in stage productions of Bugsy Malone and The Wizard of Oz

In 1995, Raven's father arranged for her to make a demo in a studio in Oslo, together with her childhood friend, Marit Larsen. The duo got a record deal with EMI Norway and formed M2M. A year later, they produced children album titled, "Marit og Marion synger kjente barnesanger" which means "Marit and Marion Sing Well-Known Children Songs". M2M was nominated for the Norwegian Grammy, Spellemannprisen, the following year.

In 1998, M2M started recording pop demos in English and struck a record deal with Atlantic Records. The two collaborated with many songwriters from around the world and produced their multi-platinum debut album, Shades of Purple, that was released in 2000, with the lead single, "Don't Say You Love Me" featuring on the soundtrack of Pokémon: The First Movie. The song was co-produced by Jimmy Bralower and Peter Zizzo (Celine Dion), and mixed by Tom Lord-Alge. It peaked on the Billboard Hot 100 at No. 21, selling 39,000 units in a week, according to SoundScan.[2] Their second album, The Big Room, which was recorded in a studio in Bearsville in Woodstock, New York, was released in 2002. After world tours to promote The Big Room ended, M2M joined Jewel on her world tour as an opening act. M2M later disbanded in September 2002.

Raven was offered a recording contract[3] with Atlantic Records, though the offer was later revoked.[4] She co-wrote "Pointless Relationship" that was the lead single of Australian singer, Tammin Sursok's debut album, 'Whatever Will Be'. She also collaborated on the track "That Day", a song released by Norwegian pop singer, Maria Arredondo, from Arredondo's 2004 follow-up album Not Going Under, and co-wrote the song "Disconnected", a song included on Lindsay Lohan's debut album "Speak" in 2004.

Upon signing her deal with Atlantic Records, Marion Raven set about recording her debut album, and worked with Swedish songwriters/producers Max Martin and Rami, as well as Canadian singer-songwriter Chantal Kreviazuk and her husband Raine Maida from 2003 to 2005. Initially, the record company was not confident of Raven's switch to a more rock image and a darker, more personal style of songwriting.[5] Raven had to fight to record her kind of music, rock music with a pop element. The resulting 14-track list, including 2 bonus tracks, cultivated a more rock/pop sound and was titled Here I Am. The album saw Raven's transformation from the candy-pop music of M2M to a more angsty, rock-oriented singer, and was released in Scandinavia, Japan, Latin America and Southeast Asia.

Here I Am spawned three singles, "End of Me", "Break You" and "Here I Am". Break You holds the record as Raven's top-selling single internationally. All three singles were successful in the Asian region where she further promoted the album with a tour. The album was released in Raven's home country on 10 August 2005 debuting at No. 6.

In early 2006, it was announced that Raven quit her contract with Atlantic Records due to "artistic differences". Raven later confirmed that she was now signed to indie label Eleven Seven Music, which was created by her management 10th Street Entertainment.

Raven later performed a duet with rock musician Meat Loaf on a version of the song "It's All Coming Back to Me Now", released as the lead single from Loaf's tenth studio album Bat Out of Hell III: The Monster Is Loose in October 2006. The track peaked at No. 1 in Norway and reached the top ten in Germany and the United Kingdom.[6] Raven later joined Loaf on an extensive tour through Canada and Europe in February 2007.[7]

In 2007 she also recorded the theme song for the US dub of W.I.T.C.H., a Jetix animated series based on the same name comic.

Raven later confirmed that her new album would contain new and old tracks from her Norwegian debut as well as re-recorded tracks such as "Heads Will Roll", which received the help of American musician Nikki Sixx and was released as an EP in October 2006.[8] Prior to the release of Raven's album Set Me Free in March 2007, she toured around The Netherlands, Germany and the United Kingdom to help promote it. Raven later embarked on another promotional tour across the UK and performed in British schools. Later between later July and August, she became a supporting act on American singer-songwriter Pink's I'm Not Dead Tour in Germany.[9] The album was later released in June 2007 and sprawled two singles; "Falling Away" and a re-release of her previous single "Break You" from her Norwegian debut album.

In 2008, Raven made a cameo appearance in the music video for the song "Saints of Los Angeles" by American heavy metal band Mötley Crüe. In 2010 she became a panellist judge on the Norwegian version of the talent show The X Factor and later on Norwegian Idol.

Originally, Raven recorded her third studio album Nevermore in 2009 and penned it for a 2010 release, but due to the internal issues with her record label Eleven Seven Music, it was never released. It dropped two singles "Flesh And Bone" and "Found Someone" exclusively released in Scandinavia.

Marion later released the single "Colors Turn to Grey" in March 2012 and stated in October 2012 that she is working on material for a new album. In March 2013, Marion released the single "The Minute" from her second album Songs from a Blackbird, which was released on 5 April 2013 in Norway. Being her first album in eight years, Songs from a Blackbird managed to peak at No. 3 in Norway.[10] The album was further promoted with a third single – the track "Driving" – and a Norwegian Tour in 2013.

In January 2014, Marion announced plans to record her third studio album after signing with Sony Music. The album's title was later announced as Scandal while its release date was set to be on September 2014, later the album was divided in two parts, Scandal Vol. 1 released on September 22, 2014, and Scandal Vol. 2 released on February 2, 2015 [11]

Marion Raven performances from other guest artists during the series were:

Raven has written several songs for other artists including:

This article uses material from the article Marion Raven from the free encyclopedia Wikipedia and it is licensed under the GNU Free Documentation License.