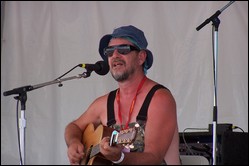 Brown was born into a musical family, and his father was a Pentecostal minister.[1] Brown spent several years traveling with a band and before returning to Iowa, where he performed live and pursued his songwriting career.[2]

During the 1980s Brown toured and had recurring performances on A Prairie Home Companion.[2] Brown self-published two albums, 44 & 66 and The Iowa Waltz. A friend founded a record company called Red House Records and Brown became its first recording artist.[3] Brown has recorded two dozen albums. In 1986 he released an album called Songs of Innocence and of Experience based on poems by William Blake. His album One Big Town (1989) won an Indie Award from the National Association of Independent Record Distributors.[4]

The Poet Game, his 1994 CD, won a NAIRD Indie award, and Further In (1996) was praised by Rolling Stone magazine.[5] His 1997 album Slant 6 Mind was nominated for a Grammy.[4] In 1999 he re-released his live performance album, One Night, on Red House Records. His album Solid Heart CD was recorded in 1999 during a benefit concert. His 2002 album, Going Driftless: An Artists Tribute to Greg Brown feature guest vocal performances by Ani DiFranco, Gillian Welch, and Shawn Colvin. A recording of another benefit concert was recorded and released in 2007 under the name Yellow Dog on the EarthWorks Music label. In 2007, Brown was nominated for a Folk Alliance Award.[6]

Brown married singer-songwriter Iris DeMent in November 2002. In 2005, Brown and his wife adopted a daughter from Russia.[2]

This article uses material from the article Greg Brown (folk musician) from the free encyclopedia Wikipedia and it is licensed under the GNU Free Documentation License.