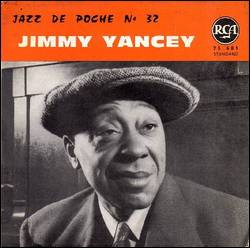 His older brother, Alonzo Yancey (1897–1944),[2] was also a pianist, and their father was a vaudeville guitarist and singer. By age ten, Yancey had toured across the United States as a tap dancer and singer, and by twenty he had toured throughout Europe. He began teaching himself to play the piano at the age of 15, and by 1915 had become a noted pianist and was already influencing younger musicians, including Meade Lux Lewis and Albert Ammons.[3][4]

He played in a boogie-woogie style, with a strong-repeated figure in the left hand and melodic decoration in the right, but his playing was delicate and subtle rather than hard driving. He popularized the left-hand figure that became known as the "Yancey bass", later used in Pee Wee Crayton's "Blues After Hours", Guitar Slim's "The Things That I Used to Do", and many other songs.[6] Yancey favored keys—such as E-flat and A-flat—that were atypical for barrelhouse blues.[3] Distinctively, he ended many pieces in the key of E-flat, even if he had played in a different key until the ending.

Although influential from an early age, Yancey did not record at all in his early career, performing only at house parties and clubs. His first recordings, in 1939, created a considerable stir in blues and jazz circles.[7]

He made most of his recordings solo, but later in his career he recorded with his wife, Estelle Yancey, singing, as Jimmy and Mama Yancey.[6] They appeared in concert at Carnegie Hall in 1948,[3] and recorded their first album in 1951, released by Atlantic Records the following year.[3]

In 1973 the Dutch composer Louis Andriessen premiered On Jimmy Yancey, a two-movement work scored for nine wind instruments, piano and double bass. Andriessen observes that Yancey was not merely one of the pioneers of the boogie-woogie piano style. "The leaping left hand of Ragtime changed into a monotonous repeating train-like figure, which in fact was more melodious than the Ragtime bass. In the first movement, three Yancey themes are quoted; the second is a kind of In Memoriam. Both movements end with a typical boogie-woogie lick, with which Yancey unexpectedly ends all his recordings. He probably did this at a sign from the producer, when the three minutes which a 78 side could hold were up, because boogie-woogie pianists habitually played for hours on end in the bars to entertain the white bourgeoisie."[8]

This article uses material from the article Jimmy Yancey from the free encyclopedia Wikipedia and it is licensed under the GNU Free Documentation License.