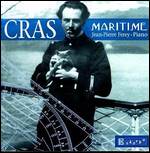 Jean Émile Paul Cras (French: [ʒɑ̃ kʁaz];[1] 22 May 1879 – 14 September 1932) was a 20th-century French composer and career naval officer. His musical compositions were inspired by his native Brittany, his travels to Africa, and most of all, by his sea voyages. As a naval commander he served with distinction in the Adriatic Campaign during World War I.

Cras was born and died in Brest. His father was naval medical officer. He was accepted into the navy at the age of seventeen. As a midshipman cadet on the Iphigénie, he fought in the Americas, the West Indies and Senegal. He was promoted to Lieutenant in 1908. His mathematical skills led to his proposing a number of innovations in technical practices which were adopted by the navy, including his invention of an electrical selector and a navigational plotter protractor (which was named after him).[2]

With the outbreak of war in 1914 Cras was appointed as adjutant to Admiral Augustin Boué de Lapeyrère. He later worked in the Submarine Defense Service. In 1916 he was appointed commander of the torpedo boat Commandant Bory. During the Adriatic campaign he sank a submarine and was commended for his bravery in rescuing a sailor who had fallen overboard.[2]

After the war Cras became Chief Secretary to the Chief of General Staff, and was promoted to Commander. He served on several other vessels before being appointed Service Chief on the General Staff for Scientific Research. In 1931 he was appointed Major General of the Port of Brest and promoted to rear admiral. He occupied this position when he died after a short illness.[2]

His daughter, Colette Cras, a concert pianist for whom he wrote his piano concerto, married the Polish-French composer Alexandre Tansman.

Cras met Henri Duparc, the famous French composer, early in his career, and the two became lifelong friends. Duparc called Cras "the son of my soul". Though Cras's duties in the French navy left him little time to devote to his musical work, he continued to compose throughout his life, mainly writing chamber music and songs. Much of his most ambitious work, the opera Polyphème, was written and orchestrated during the war, however the majority of his musical output dates from after the war. Today, his string trio and string quartet are his best known works.[2]

His lyric tragedy, Polyphème is considered his masterpiece. The opera was acclaimed at its premiere in 1922, giving Cras a burst of notoriety in the French press. The title character is Polyphemus, who, according to Greek mythology, is the eldest Cyclops and son of Poseidon. It tells the well-known story of the attempt by Polyphemus (baritone) to steal Galatea (soprano) from Acis (tenor). In the original myth Polyphemus eventually kills Acis by rolling a rock onto him. Albert Samain, the librettist, humanized Polyphemus by having him become aware of the feelings shared by two lovers and thus, decide not to crush them. Ultimately, the cyclops wanders into the sea to find death because the couple's happiness horrifies him. The music is impressionistic, restless, and highly chromatic, in the spirit of Chausson and Duparc. The influence of Debussy's opera Pelléas et Mélisande is also noticeable.[2] (A fine recording of this opera was released in 2003, with Bramwell Tovey conducting the Luxembourg Philharmonic Orchestra and Armand Arapian in the title role.)

Cras's later work developed a more acerbic style comparable to that of Bartók, though formally close to César Franck. He considered chamber music to be his forte, writing that "this refined musical form has become for me the most essential".[3] The String Trio in particular integrates a wide range of styles, including North African influences. It was a described as a 'miraculous' work by André Himonet in 1932, achieving "perfectly balanced sonority and a plenitude of expression between which one dare not choose."[4] The Trio for Strings and Piano also blends African and Eastern melodic patterns with Breton musical traditions into a coherent whole. The critic Michel Fleury compares his work to the Japonist style of the artist Henri Rivière revealing "a stylised Breton land, as though it had been passed through the sieve of his varied experiences gained in the four quarters of the globe."[5]

This article uses material from the article Jean Cras from the free encyclopedia Wikipedia and it is licensed under the GNU Free Documentation License.