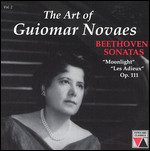 Guiomar Novaes (February 28, 1895 - March 7, 1979) was a Brazilian pianist noted for individuality of tone and phrasing, singing line, and a subtle and nuanced approach to her interpretations. She is widely considered one of the greatest pianists of the twentieth century.

Born in São João da Boa Vista (in the area of São Paulo state in Brazil) as one of the youngest children in a very large family, she studied with Antonietta Rudge Miller and Luigi Chiafarelli before she was accepted as a pupil of Isidor Philipp at the Conservatoire de Paris in 1909,[1] That year there were two vacancies for foreign students at the Conservatoireand 387 applicants. Novaes played for a jury that included Debussy, Fauré and Moszkowski. Her pieces were the Paganini-Liszt Etude in E, Chopin's A flat Ballade and Schumann's Carnaval. She won first place. Debussy wrote a letter afterwards in which he reports his amazement about the little Brazilian girl who came to the platform and, forgetting about public and jury, played with tremendous beauty and complete absorption.[2]

Novaes' technique and musical interpretations may have already been fully formed by the time she reached Paris. One of her first pieces for Philipp was Beethoven's Les Adieux Sonata. Philipp said she played the second movement much too fast and to repeat it slower. Novaes thought for a moment, then replayed with some differences in detail but at exactly the same tempo. This happened several times. Philipp finally gave up, saying later, "Even at that age, she had a mind of her own."[2] Phillip later considered her one of his greatest students.

By the end of 1910, Novaes was a concert veteran. She made her official debut with the Chatelet Orchestra under Gabriel Pierné. She also played under Sir Henry Wood in England and on tour in Italy, Switzerland and Germany. Returning to Brazil at the start of World War I, she made her U.S. debut in Aeolian Hall in New York City in 1915. She was still only 19. Richard Aldrich at the New York Times dubbed her "a musician by the grace of God." Pitts Sanborn in the Boston Globe called her "the young genius of the piano."[2] Dubbed "the Paderewska of the Pampas,"[2] she continued playing in the United States frequently, mostly in New York City. In 1922 she married Octavio Pinto, a civil engineer who was also a pianist and composer. Novaes performed for the Peabody Mason Concert series in 1954.[3] She continued her career into the 1970s. Through the Sixties she would come to New York every December for a single concert at Carnegie Hall; her loyal fans would stand in line around the block in the snow to purchase tickets. Her final concert appearance in New York was at Hunter College in 1972.[1] Novaes died in São Paulo, Brazil, in 1979.

Novaes commanded a very large repertoire in her early touring days, narrowing it in later life. Whatever she played, she played with an aristocratic approach, a perpetually singing line and complete spontaneity. Her natural approach to the keyboard was part of her appeal. Because of her relaxed, effortless nature at the keyboard, she was one of the few pianists about whom it seemed the instrument was a welded extension of her arms and fingers. The tone and subtlety of her tone recalled the great Romantic pianists of previous generations. Her technique was supple, with no striving for effect.[4]

At all times her playing was intensely poetic. Harold C. Schonberg recalls in his book The Great Pianists that her performance of the Schumann concerto under the direction of André Cluytens in the late 1950s "was strikingly reminiscent of Josef Hofmann's [performances]. It had much the same suppleness, tonal subtlety and unswerving rhythm."[5] Like Hofmann, she never played a piece quite the same way twice. Each time she brought to it a slightly different point of view; each time, the new approach seemed inevitable and perfectly natural.[5]

David Dubal writes in "The Art of the Piano" that her playing was "first and always personalized. She delighted in details, leaving one wondering why others never saw or savored them. Even at capricious moments, she had that marvelous and indispensable trait of a great interpreter -- the power to convince. In whatever she touched there was a feeling of intimacy, and it was Chopin she touched most."

Novaes was renowned for her interpretations of Chopin, Schumann and to a lesser extent Debussy, full of nuances and insights. She left a variety of rare recordings, including a recording of Beethoven's Piano Concerto No. 4, with Otto Klemperer and the Vienna Symphony Orchestra, which is highly rated by musicians and critics alike.[1] The noted Brazilian Chopin specialist Nelson Freire says that he was deeply influenced by Novaes' recording of Chopin's Second Piano Concerto with Klemperer, which he first heard at age 14 and regards as an ideal to strive for.[6]

Novaes made a number of discs for RCA in the 1920s, as well as piano rolls, but was most extensively recorded by Vox in the 1950s.[1] Her Chopin recordings have been reissued by Vox on CD.[7] This set contains certain etudes, nocturnes and the B-flat minor piano sonata ("Funeral March"). At Philipp's urging, she recorded a set of Mendelssohn's Songs Without Words, which he said were 'unduly neglected."[8] She also recorded the complete Etudes of Chopin, Op. 10 and 25, and both Concertos.

This article uses material from the article Guiomar Novaes from the free encyclopedia Wikipedia and it is licensed under the GNU Free Documentation License.