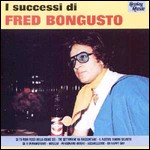 Alfredo Bongusto (born 6 April 1935 in Campobasso), known by his stage name Fred Bongusto, is an Italian light music singer and songwriter who was very popular in the 1960s and 1970s.

He debuted with the song "Bella Bellissima", which was written by his friend Ghigo Agosti and produced by the Milan-based label Primary. It was released on phonographic record in 1960, with "Doce Doce" as the back side. Some of his most successful songs include "Malaga", "Una rotonda sul mare", "Spaghetti a Detroit" and "Prima c'eri tu", which won the 1966 edition of Un Disco per l'Estate. Bongusto was also successful in South America, especially Brazil. He had collaborated with Toquinho and Vinicius de Moraes.

He composed the soundtracks of 24 movies, such as Malizia, Superfantozzi and Fantozzi contro tutti. He also starred in Obiettivo ragazze (1961) and Peccato Veniale (1974).

In the 1990s, he was elected as a PSI town councillor in Bari. On 18 March 2005 the President of the Council (Premier), Silvio Berlusconi, presented him with a silver plate to celebrate the 50th year of his career. On 2 June 2005 he was awarded the title of Commendatore by President Carlo Azeglio Ciampi.

He is currently married to Gabriella Palazzoli, an Italian soubrette, who was famous in the 1950s and 1960s. She is known for starring in the film Buonanotte... Avvocato! with Alberto Sordi. In 1960, before their marriage, Palazzoli had a previous marriage with American actor John Drew Barrymore, who is the father of her daughter Blyth Dolores. Blyth was raised by Bongusto.

Bongusto enjoys playing football and tennis, and is very good at both sports. He enjoys antiquing and reading Tex Willer comics. Bongusto currently spends much of his time in Ischia, in the village of Sant'Angelo, in the places which inspired some of his songs.

This article uses material from the article Fred Bongusto from the free encyclopedia Wikipedia and it is licensed under the GNU Free Documentation License.