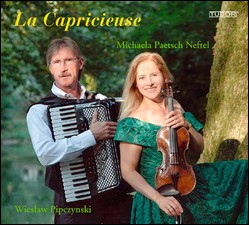 Michaela Paetsch Neftel (born November 12, 1961) is an American violinist who was born in Colorado Springs. She is known for being the first female in the world to have recorded all 24 Paganini Caprices for solo violin.

Michaela Paetsch was raised in a large musical family - with parents (Gunther and Priscilla), two sisters (Phebe and Brigitte) and four brothers (Johann, Christian, Engelbert and Siegmund) - in Colorado Springs. She studied first with her parents since the age of three with Priscilla and Gunther Paetsch, then with Ivan Galamian at Meadowmount and later with Szymon Goldberg at Yale University and at the Curtis Institute of Music.

She made her debut as a soloist at the age of eleven with the Mendelssohn Violin Concerto. Since then, she has been performing as soloist, recitalist, and chamber musician in the major musical centres of the world, including New York's Carnegie Hall, Avery Fisher Hall, the Library of Congress in Washington. She has also played in major festivals such as the Marlboro, Tokyo, Davos, Berlin (Brandenburg Summer Concerts), Banff, Boulder, and "Mostly Mozart" in New York.

She has been invited as soloist with the NHK Symphony Orchestra, the Philharmonics of Osaka, Japan, Seoul, Liège and Bergen; the National Orchestra of Belgium, the Leipzig Gewandhaus, the Frankfurt Radio Symphony, the Residentie Orchestra, the Orchestre de la Suisse Romande, and the BBC Symphony, among others. She has performed under such conductors as Kent Nagano, Dimitrij Kitajenko, Horst Stein and Myung-Whun Chung.

Since 1993 Michaela Paetsch is the violinist of the quartet "ensemble incanto" with which she tours extensively and records regularly. She lives in Bern, Switzerland.

This article uses material from the article Michaela Paetsch from the free encyclopedia Wikipedia and it is licensed under the GNU Free Documentation License.

Edvard Grieg "Morgenstimmung" und "Anitras Tanz" aus "Peer Gynt" op. 23
Update Required To play the media you will need to either update your browser to a recent version or update your Flash plugin.