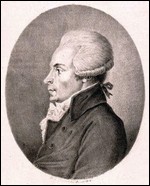 died on 30/6/1792 in Ludwigslust, Mecklenburg-Vorpommern, Germany

Francesco Antonio Rosetti (c. 1750 – 30 June 1792, born Franz Anton Rösler, changed to Italianate form by 1773) was a classical era composer and double bass player, and was a contemporary of Haydn and Mozart. The occasional disambiguation with a supposed, but non-existent, "Antonio Rosetti born 1744 in Milan", is due to an error by Ernst Ludwig Gerber in a later edition of his Tonkünstler-Lexikon[1] having mistaken Rosetti for an Italian in the first edition of his own Lexikon, and therefore including Rosetti twice - once as an Italian, once as a German-Czech.[2]

Rosetti was born around 1750 in Litoměřice, a town in Northern Bohemia, and was originally called Franz Anton Rösler. He is believed to have received early musical training from the Jesuits. In 1773 Rosetti left this native country and joined the Hofkapelle of Prince von Öttingen-Wallerstein, whom he served for sixteen years, before becoming Kapellmeister to the Duke of Mecklenburg-Schwerin in 1789. In 1777, he married Rosina Neher, with whom he had three daughters. In 1781 he was granted leave to spend five months in Paris. Many of the finest ensembles in the city performed his works. Rosetti arranged for his music to be published, including a set of six symphonies published in 1782. He returned to his post, assured of recognition as an accomplished composer. He died only half a year after Mozart on 30 June 1792.

Rosetti wrote a great deal of instrumental music, including many symphonies and concertos. Rosetti also composed a significant number of vocal and choral works, particularly in the last few years of his life. Among these are German oratorios including Der sterbende Jesu and Jesus in Gethsemane (1790) and a German Hallelujah.[3] He is perhaps best known today for his horn concertos, which Mozart scholar H. C. Robbins Landon suggests (in The Mozart Companion) may have been a model for Mozart's four horn concerti. Rosetti is also known for writing the Requiem (1776) which was played at a memorial for Mozart in December 1791.

Attributing some music to Rosetti is difficult because several other composers with similar names worked at the same time, including Franciscus Xaverius Antonius Rössler.

Note: The recordings of D19 through D24 above are arrangements for harp.

This article uses material from the article Antonio Rosetti from the free encyclopedia Wikipedia and it is licensed under the GNU Free Documentation License.