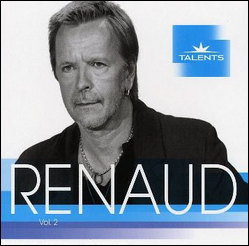 Renaud Pierre Manuel Séchan, known as Renaud (French: [ʁəno] ( listen); born 11 May 1952), is a popular French singer, songwriter and actor. His characteristically 'broken' voice makes for a very distinctive vocal style. Several of his songs are popular classics in France, including the sea tale "Dès que le vent soufflera", the irreverent "Laisse béton", the ballad "Morgane de toi" and the nostalgic "Mistral gagnant". However, with the exception of a recording of "Miss Maggie" in English[1] and a franglais recording of "It is not because you are", his work is almost unknown outside the French-speaking world.

Fresh out of school, Renaud was determined to become an actor. By chance he met the actor Patrick Dewaere and was invited to join the company of the comedy theatre Café de la Gare, which had recently been founded by Patrick Dewaere, Coluche, and Miou-Miou.

His early work is characterized by a volatile temperament, innovative use of French, and edgy, dark, leftist social and political themes. Raised in an educated milieu, the son of an intellectual, Renaud adopted the looks and attitude of working-class youth in the 1970s, and reflected this in his lyrics. A recurrent theme is his disgust for the average French person with petit-bourgeois preoccupations and right-wing leanings (see beauf). His music focuses on the disparity between classes, the abuse of political power, overbearing authority and disgust for the military and the police, with rare glimpses of tenderness for his fellow humans, the planet earth, and art.

In 1985, in a concert in Moscow, in what was an orchestrated gesture, roughly one third of the spectators upped and left the concert hall when he sang the anti-militarist "Déserteur". In the late 1980s and the 1990s, Renaud's work was distinguished by "softer" subjects such as his wife (later ex-wife) Dominique, his daughter Lolita and his friends, as well as comedian and singer Coluche for whom he wrote the tribute "Putain de camion" ("Bloody Lorry") after Coluche's death in a road accident. He has also ventured into regional music and language, such as the language of Marseille in La Belle de Mai, the north with Renaud cante el' Nord and even Corsican polyphonics in "Lolito lolita".

In 1992, he financially helped resurrect the defunct satirical weekly Charlie Hebdo and wrote a column titled Renaud bille en tête for a couple of years. His column appeared again in 1995-1996, retitled Envoyé spécial chez moi. In 2006, he published Les Bobos, as a satire on the Parisian lower bourgeoisie.

In 1993, he also played the leading part of Étienne Lantier in the film Germinal directed by Claude Berri

After an unproductive period marked by alcohol addiction, he made a very significant comeback with his 2002 album Boucan d'enfer. That album's iconic hit was "Manhattan-Kaboul", a powerful duo with Axelle Red which tackled current issues by drawing a parallel between a victim of the 9-11 attacks in New York and an Afghan girl, both caught up in a war they don't understand.

In 2014, a collective of 15 artists released a tribute album containing 14 tracks covers of his songs under the title La Bande à Renaud.

On 8 April 2016, Renaud released his new long-awaited studio album, announced and known under the title Toujours debout but oddly sold under the simple title Renaud.

Renaud's father Olivier Séchan, born to a Protestant Languedoc family from the Cévennes and Montpellier, was a prize-winning novelist and popular children's writer. He taught German in a secondary school in Paris. The director Edmond Séchan is his uncle. His grandfather was the famous scholar and Hellenist Louis Séchan, who taught at the Sorbonne. His ancestors were pastors. His mother is the daughter of a coal miner from the Nord-Pas-de-Calais region. Renaud dedicated part of his work to his familial roots, singing traditional songs in the regional Picard language and playing the part of Étienne Lantier in Germinal, a film based on the famous Émile Zola novel.

In August 2005, Renaud married Romane Serda, the mother of his son Malone. In 2007, he announced to the press his intention to move his family to London, citing a love for British society and expressing disillusionment at the current state of France. In 2009 Renaud's daughter, writer Lolita Séchan, married French acoustic singer-songwriter Renan Luce.[4]

In September 2011, Romane divorced Renaud on the account of his alcoholism and depression.

This article uses material from the article Renaud from the free encyclopedia Wikipedia and it is licensed under the GNU Free Documentation License.