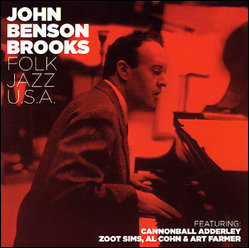 Brooks worked early in his career as an arranger for Randy Brooks, Les Brown, Boyd Raeburn, and Tommy Dorsey. He worked often with lyricists Eddie DeLange and Bob Russell in the 1940s; he and DeLange wrote the song "Just as Though You Were Here," a hit for Tommy Dorsey with Frank Sinatra as vocalist. He wrote "You Came a Long Way from St. Louis" with Bob Russell for Ray McKinley in 1948.

In 1956 Brooks worked with Zoot Sims and Al Cohn on a recording "Folk Jazz U.S.A." He became better-known as a composer during this time, and his works blend elements of folk music and dodecaphony with the idioms of modern jazz. In 1958 he composed a work entitled Alabama Concerto and assembled a cast of sidemen for a recording which included Cannonball Adderley, Art Farmer, Barry Galbraith, and Milt Hinton. The recording was eventually re-issued under Adderley's name.

Brooks was a close friend of Gil Evans. Evans later recorded his works "Sirhan's Blues" and "Where Flamingos Fly" (the last co-written with Harold Courlander and Elthea Peale). Brooks and Courlander collaborated on a book of transcriptions of rural blues and spirituals in Alabama, which provided some of the inspiration for the Alabama Concerto. A trio Brooks formed In the 1960s Brooks performed at the International Jazz Festival in Washington in 1962 with a composition called "The Twelves," based on improvisations on twelve-tone rows. This became part of a LP called "Avant Slant," which was a collage of new and already recorded sounds and songs from Milt Gabler, the poet Robert Graves, LeRoi Jones, Lightnin' Hopkins, and others.

This article uses material from the article John Benson Brooks from the free encyclopedia Wikipedia and it is licensed under the GNU Free Documentation License.