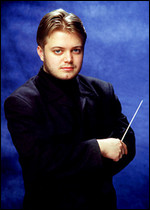 Mikko Franck (born 1 April 1979) is a Finnish conductor and violinist.

"He gave me everything that can be taught about this profession. For instance, we used video as an aid in losing my unnecessary mannerisms."

Franck ended his studies there in 1998 without receiving a diploma because his international career had already begun.[1]

Before age 23, Franck had made his conducting début with all of the leading Scandinavian orchestras, as well as with the Philharmonia Orchestra of London, the London Symphony Orchestra, the Munich Philharmonic, the Berlin Staatsoper (Berlin State Opera) and the Israel Philharmonic. He received a Grammy nomination for "Best Orchestral Performance" for his first recording, which was of music by Jean Sibelius. He is a particular champion of the works of Einojuhani Rautavaara.

Franck became artistic director of the National Orchestra of Belgium in September 2002, and held the post until 2007. In 2004, Franck was named general music director of the Finnish National Opera and officially took up the post in August 2006. In February 2007, he suddenly announced his resignation from this position, claiming a loss of confidence in the company's then-general director Erkki Korhonen and administrative director Pekka Kauranen.[2] However, in November 2007, the company nominated Franck to the dual post of Artistic Director and General Music Director,[3] and in December 2007, officially named him to both posts.[4] Franck concluded his tenure in both posts as of 31 July 2013.[5]

Franck married the German opera director Martina Pickert in 2006. The couple divorced in 2010.

This article uses material from the article Mikko Franck from the free encyclopedia Wikipedia and it is licensed under the GNU Free Documentation License.

Ludwig van Beethoven Allegro con brio aus dem Klavierkonzert Nr.2 B-Dur
Update Required To play the media you will need to either update your browser to a recent version or update your Flash plugin.