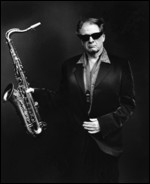 Hans Dulfer (born 28 May 1940) is a Dutch jazz musician who plays tenor saxophone.

Hans Dulfer was born on 28 May 1940 in Amsterdam, Netherlands. He began at age 17 and has been referred to as "Big boy" because of his album of the same name. At the end of the sixties he and Herbert Noord (Hammond organ) founded a quartet that played saxophone/organ funk. He has done a good deal of cross-over jazz or jazz fusion and even worked with Punk rockers at one point. He has recorded an album with bassist Frank Wright titled "El Saxofón". He has comparatively high popularity in Japan[1] where Hyperbeat was a top-selling CD by instrumental standards. Furthermore Japanese film maker Masaaki Yuasa stated that he listened to Hans Dulfer's music while working on Mind Game.[2]

Hans Dulfer is the father of saxophonist Candy Dulfer and the two worked together on the album Dulfer Dulfer, whose title refers in part to Hans.

This article uses material from the article Hans Dulfer from the free encyclopedia Wikipedia and it is licensed under the GNU Free Documentation License.