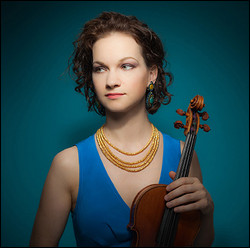 Hilary Hahn (born November 27, 1979) is an American violinist. In her active international career she has performed throughout the world both as a soloist with leading orchestras and conductors and as a recitalist. She also has built a reputation for championing contemporary music. Several composers have written works especially for her, including concerti by Edgar Meyer and Jennifer Higdon and partitas by Antón García Abril.

Hahn was born in Lexington, Virginia on November 27, 1979.[1] She began playing the violin one month before her fourth birthday in the Suzuki Program of Baltimore's Peabody Institute. She participated in a Suzuki class for a year. Between 1985 and early 1990 Hahn studied in Baltimore under Klara Berkovich.[2] In 1990, at ten, Hahn was admitted to the Curtis Institute of Music in Philadelphia where she became a student of Jascha Brodsky. Hahn studied with Brodsky for seven years and learned the études of Kreutzer, Ševčík, Gaviniès, Rode, and the Paganini Caprices. She learned twenty-eight violin concertos, as well as recital programs, chamber works, and assorted showpieces.[3]

In 1991, at the age of eleven, Hahn made her major orchestral debut with the Baltimore Symphony Orchestra.[4] Soon thereafter, Hahn debuted with the Philadelphia Orchestra,[5] Cleveland Orchestra, Pittsburgh Symphony Orchestra, and the New York Philharmonic.[5] Hahn made her international debut in 1994 performing the Bernstein Serenade in Hungary with Ivan Fisher and the Budapest Festival Orchestra. Her German debut came in 1995 with a performance of the Beethoven Violin Concerto with Lorin Maazel and the Bavarian Radio Symphony Orchestra.[6] The concert was broadcast in Europe. A year later, Hahn debuted at Carnegie Hall in New York City as a soloist with the Philadelphia Orchestra.[5] In a 1999 interview with Strings Magazine, Hahn cited people influential to her development as a musician and a student, including David Zinman, the conductor of the Baltimore Symphony and Hahn's mentor since she was ten, and Lorin Maazel, with whose Bavarian Radio Symphony Orchestra she performed in Europe.[7]

By sixteen, Hahn had completed the Curtis Institute's university requirements, but elected to remain for several years to pursue elective courses, until her graduation in May 1999 with a Bachelor of Music degree.[3] During this time she coached violin with Jaime Laredo,[8] and studied chamber music with Felix Galimir and Gary Graffman.[1] She appeared on Mister Rogers' Neighborhood, in February 2000, discussing her early experiences with the violin and performing a solo and a duet.[9] In a December 2001 interview on PBS, Hahn stated that of all musical disciplines, she is most interested in performance.[10]

On March 17, 2015, Hahn announced on Facebook that she and her husband were expecting a child; she gave birth in August to a girl, named Zelda.[11]

Hahn began recording in 1996.[12] She has released 16 albums on the Deutsche Grammophon and Sony labels, in addition to three DVDs, an Oscar-nominated movie soundtrack, an award-winning recording for children, and various compilations. Her recordings are often marked by a blending of newer and traditional pieces.[13] Her albums include pairings of Beethoven with Leonard Bernstein, Schoenberg with Sibelius, Brahms with Stravinsky, and Tchaikovsky with Jennifer Higdon.[14][15][16][17]

In addition to being a solo violinist, Hahn has also performed as a chamber musician. Since the summer of 1992 she has performed nearly every year with the Skaneateles Chamber Music Festival in Skaneateles, New York.[22] Between 1995 and 2000 she performed and studied chamber music at the Marlboro Music Festival in Vermont,[23] and in 1996 she served as an artist and a member of the chamber music mentoring program of The Chamber Music Society of Lincoln Center.[3] In 2004, she toured Saint Petersburg, Russia, with the Poulenc Trio.[24]

On January 14, 2010, Hahn appeared on The Tonight Show with Conan O'Brien for an interview in support of her album, Bach: Violin & Voice.[25]

Hahn has been interested in cross-genre collaboration and pushing musical boundaries. She began performing and touring in a crossover duo with singer-songwriter Josh Ritter in 2007 and with singer-songwriter Tom Brosseau in 2005.[26] She has recorded songs with "…And You Will Know Us By the Trail of Dead".[27] In 2012, Hahn released an album with German pianist and composer Hauschka entitled Silfra. The songs on the disc were completely improvised. Silfra was produced by Valgeir Sigurðsson.[28][29] According to Hahn, "Other musicians cross genres all the time. For me it's not crossover—I just enter their world. It frees you up to think in a different way from what you've been trained to do."[30]

In June 2014 Hahn was awarded the Glashütte Original MusikFestspiel-Preis of the Dresden Music Festival.[31]

Beginning in 2016, Hahn has piloted free concerts for parents with infants, a knitting circle, a community dance workshop, a yoga class, and art students. She plans to continue to create these community-oriented concerts, encouraging people to combine live performance with their interests outside the concert hall and providing opportunities for parents to hear music with their infants, who might be barred from traditional concerts.[32]

Hahn is also a noted champion of new works. In 1999, she commissioned Edgar Meyer to write a concerto. She later recorded the piece with the St. Paul Chamber Orchestra.[33] In 2010, a concerto written for Hahn by Jennifer Higdon and recorded with the Royal Liverpool Philharmonic was awarded the Pulitzer Prize in Music.[34]

Hahn commissioned 26 contemporary composers to write short encore pieces for In 27 Pieces: the Hilary Hahn Encores. Among the composers are David Del Tredici, Jennifer Higdon, Du Yun, Elliott Sharp, David Lang, Nico Muhly, James Newton Howard, Valentyn Sylvestrov and Max Richter.[35] For the 27th encore, she held an open contest that drew more than 400 entries and was won by Jeff Myers.[36] The international premiere tours, from 2011 to 2013, were met with wide critical and audience acclaim.[37][38][39] In November 2013, these 27 short pieces were released on Deutsche Grammophon.[40] The recording won the Grammy Award for Best Chamber Music/Small Ensemble Performance.

In 2016 and 2017, in recital tours across the U.S., Europe, and Japan, Hahn premiered six new partitas for solo violin by Antón García Abril, her first commissioning project for solo violin, as well as her first commission of a set of works from a single composer. The relationship with García Abril was forged during In 27 Pieces: the Hilary Hahn Encores. Digital and physical editions of the complete sheet music will be released by Musicnotes and Boosey & Hawkes.

Hahn began her film recording career as the soloist for James Newton Howard's score for M. Night Shyamalan's The Village in 2004. The film was nominated for an Academy Award for Best Original Score.[41] Hahn's recording of Samuel Barber's Violin Concerto was used extensively in The Deep Blue Sea, starring Rachel Weisz. The film uses the piece's second movement to accompany a nine-minute sequence.[42] In 2013 Hahn was the soloist on Andrew Hewitt's score for the film The Sea.[43]

In 1999, Hahn said that she played Bach more than any other composer and that she had played solo Bach pieces every day since she was eight.[3]

Bach is, for me, the touchstone that keeps my playing honest. Keeping the intonation pure in double stops, bringing out the various voices where the phrasing requires it, crossing the strings so that there are not inadvertent accents, presenting the structure in such a way that it's clear to the listener without being pedantic – one can't fake things in Bach, and if one gets all of them to work, the music sings in the most wonderful way.

In a segment on NPR entitled "Musicians in Their Own Words", Hahn speaks about the surreal experience of playing the Bach Chaconne (from the Partita for Violin No. 2) alone on the concert stage. In the same segment, she discusses her experiences emulating a lark while playing The Lark Ascending by Ralph Vaughan Williams.[45]

Her violin is an 1864 copy of Paganini's Cannone made by Vuillaume.[46] In an interview on Danish television, she states that she almost never leaves her instrument out of sight. Hahn uses bows by American bow maker Isaac Salchow[47] and French bow makers Émile Ouchard, Paul Jombar, and Emil Miquel. As for her strings, she uses Thomastik-Infeld Dominants for the A (aluminum wound), D and G (silver wound) and uses a Pirastro Gold Label Steel E.[48]

Hahn's official website includes a section entitled "By Hilary". In the Strings Magazine interview, Hahn said that the idea for her "Postcards from the Road" feature originated during an outreach visit to a third-grade class in upstate New York. The class was doing a geography project in which the students asked everyone they knew who was traveling to send postcards from the cities that they were visiting, in order to learn more about the world. Hahn decided to participate after receiving a positive reaction from her suggestion that she take part as well.[3] Hahn enjoyed her first year's experience with the project so much that she decided to continue it on her new website.[49] A few years later, she expanded the postcards to a journal format. Journal entries usually include photographs from her tours and rehearsals.

This article uses material from the article Hilary Hahn from the free encyclopedia Wikipedia and it is licensed under the GNU Free Documentation License.

Domenico Scarlatti Sonate G-Dur K 144
Update Required To play the media you will need to either update your browser to a recent version or update your Flash plugin.