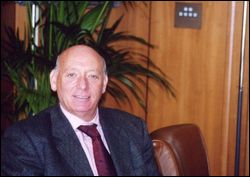 Pinchas Steinberg (born 13 December 1945 in New York City) is an Israeli conductor. He was a violin student in the USA and a composition student in Berlin. He studied Conducting in Milano with Antonino Votto. His conducting debut was in 1974 with the RIAS Symphony Orchestra, Berlin. He was a regular guest conductor with the Vienna State Opera from 1986-1993. His guest conducting appearances in opera included a 1979 performance of L'amore dei tre Re at the 1979 Wexford Festival[1] and a 1981 production of Luisa Miller at the Royal Opera House, Covent Garden.[2]

Steinberg was Principal Conductor of the Vienna Radio Symphony Orchestra from 1989-1996, and of the Orchestre de la Suisse Romande from 2002-2005.

This article uses material from the article Pinchas Steinberg from the free encyclopedia Wikipedia and it is licensed under the GNU Free Documentation License.