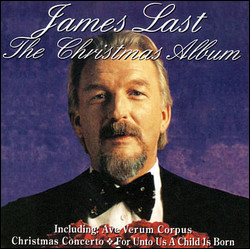 James Last (also known as "Hansi") (born Hans Last, 17 April 1929) is a German composer and big band leader. His "happy music" made his numerous albums best-sellers in Germany and the United Kingdom. His composition, "Happy Heart", became an international success in interpretations by Andy Williams and Petula Clark. According to the British Hit Singles & Albums book, he has reportedly sold in excess of seventy million albums worldwide.[1]

Last's father was an official at the public works department of the city of Bremen and he grew up in the suburb of Sebaldsbrück. He learned to play the piano from the age of 12, then switched to double bass as a teenager. His home city was heavily bombed in World War II and he ran messages to air defence command posts during raids. At 14 he was entered in the Bückeburg Military Music School of the German Wehrmacht.[2]

After the fall of the Nazis, he joined Hans-Gunther Österreich's Radio Bremen Dance Orchestra in 1946. In 1948, he became the leader of the Last-Becker Ensemble, which performed for seven years. During that time, he was voted as the best bassist in the country by a German jazz poll for three consecutive years, from 1950-1952. After the Last-Becker Ensemble disbanded, he became the in-house arranger for Polydor Records, as well as for a number of European radio stations. For the next decade, he helped arrange hits for artists like Helmut Zacharias, Freddy Quinn, Lolita, Alfred Hause and Caterina Valente.

Last first released albums in the U.S. under the titles The American Patrol on Warner Brothers around 1964. He also released a series of nine albums in a series called Classics Up To Date vols. 19 which served up arrangements of classical melodies with strings, rhythm and wordless chorus from the mid-1960s through the early 1980s. Last released an album, Non-Stop Dancing, in 1965, a recording of brief renditions of popular songs, all tied together by an insistent dance beat and crowd noises. It was a hit and helped make him a major European star. Over the next four decades, Last released over 190 records, including several more volumes of Non-Stop Dancing. On these records, he varies his formula by adding different songs from different countries and genres, as well as guest performers like Richard Clayderman and Astrud Gilberto. He also had his own successful television series in the 1970s with guests ABBA and Lynsey de Paul.

Though his concerts and albums are consistently successful, especially in the UK, where he had 52 hit albums between 1967 and 1986, which made him second only to Elvis Presley in charting records, he has had relatively few hit singles. In the UK, his only chart singles were "The Seduction", the theme from American Gigolo (1980) composed by Giorgio Moroder, and "Biscaya" from the album Biscaya. In the US, where "The Seduction" became a Top 40 hit, peaking at No. 28 on the Billboard Hot 100 and No. 22 on the Adult Contemporary chart in May 1980, Last was somewhat more successful on the singles charts. In 2003, his song "Einsamer Hirte" (The Lonely Shepherd) which features the pan flute of Gheorghe Zamfir appeared on the soundtrack of the Quentin Tarantino movie Kill Bill: Vol. 1.[3]

He has won numerous popular and professional awards, including Billboard magazine's Star of the Year trophy in 1976, and has been honoured for lifetime achievement with the German ECHO prize in 1994. His song "Music from Across the Way" (recorded by Andy Williams in 1972) is a melody with a classical feeling and was a worldwide hit; it is the only other Last single apart from "The Seduction" to reach the U.S. Hot 100, where it peaked at No. 84 (and No. 18 on the Adult Contemporary chart) in late 1971. (His only other U.S. chart single was a double-sided entry featuring remakes of The Village Stompers' "Washington Square" and Creedence Clearwater Revival's "Proud Mary", which reached No. 22 on the Adult Contemporary chart in early 1971.)

Last has a large fan base in Europe and elsewhere. His trademark is big band arrangements of pop music hits; his series of party albums is equally well known. Over the course of his career, he has sold well over 100 million albums.[4] In the United States, Last's music was a staple of the mainly instrumental-based Beautiful Music radio format for years.

Last divides his time between Florida and Germany. He gives much credit to his wife and son, who help with his music.

This article uses material from the article James Last from the free encyclopedia Wikipedia and it is licensed under the GNU Free Documentation License.

Joseph Haydn Benedictus und Hosanna aus der Missa Solemnis
Update Required To play the media you will need to either update your browser to a recent version or update your Flash plugin.