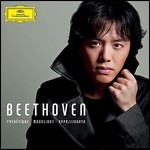 Li Yundi (simplified Chinese: 李云迪; traditional Chinese: 李雲迪; pinyin: Lǐ Yúndí) (born October 7, 1982) is a Chinese classical pianist. He is also popularly known as Yundi and formerly Yundi Li. Born in Chongqing, Li is most well known for being the youngest pianist to win the International Frédéric Chopin Piano Competition, in 2000, at the age of 18, and for judging it in 2015. He currently resides in Beijing.

His father, Li Chuan, and his mother, Zhang Xiaolu, were both workers for the Sichuan Chongqing Steel and Iron Company.[1] Although coming from a family of non-musicians, Li took to music early. When he was three years old, his parents bought him an accordion after he became so entranced by an accordion player in a shopping mall that he refused to leave.[2] He mastered the instrument by the age of four, studying with Tan Jianmin, a music professor in China. Only one year later, he won the top prize at the Chongqing Children's Accordion Competition.[3] Li began studying piano at the age of seven. Two years later, his teacher introduced him to Dan Zhaoyi, one of China's most renowned piano teachers, with whom he would study for nine years.[4] Li's ambition was to become a professional pianist. In 1994, he entered the Shenzhen Arts School, Shenzhen, China. He later studied at the Hochschule für Musik, Theater und Medien Hannover in Hanover, Germany.

In October 2000, at the urging of the Ministry of Culture of the People's Republic of China, Li participated in the 14th International Frédéric Chopin Piano Competition in Warsaw. He was the first participant to be awarded First Prize in 15 years. At 18 years of age, he was the youngest winner—and the first Chinese—in the competition's history. Li was given the "Polonaise award" by the Chopin Society for his performance at the competition.[3]

Soon after, Li sought out pianist Arie Vardi as an instructor, and therefore left his parents' home to live and study in Hannover, Germany.[3]

In May 2010, in recognition of his contribution to Polish culture, the Polish Minister of Culture and National Heritage presented Yundi with a silver medal of the ‘Gloria Artis’ order of merit. [6]

Li's second recording of Liszt for Deutsche Grammophon, for whom he exclusively recorded until November 2008, was released in August 2003 and was named "Best CD of the Year" by The New York Times. His third recording, comprising Chopin's four Scherzi and three Impromptus, was released in late 2004. He is scheduled to release a recording of Beethoven sonatas in late 2012 for Deutsche Grammophon.[7] He has also given a recital in the renowned Musikverein in Vienna, performing works by Mozart, Scarlatti, Schumann, and Liszt.

Li obtained Hong Kong residency in November 2006 under the Quality Migrant Admission Scheme, among the first batch of people to do so under the scheme.[8]

Li is the subject of a 2008 feature-length documentary, The Young Romantic: Yundi Li, directed by Barbara Willis Sweete. This documentary captures Li as he works with the conductor Seiji Ozawa to prepare for his debut with the Berlin Philharmonic.[9] He appeared as a Pennington Great Performers series artist with the Baton Rouge Symphony Orchestra, also in 2008.

In January 2010, Li signed an exclusive recording contract with EMI Classics with plans to record the complete works for solo piano by Frédéric Chopin.[10]

Li performed a solo recital at the Royal Festival Hall in London on March 16, 2010. He played a repertoire of Chopin pieces to a sold-out audience.[11]

In May 2012, Li officially signed with Universal Music Group and cooperated with Deutsche Grammophon once again.[12] He then released recordings of Beethoven Piano Sonatas, Beethoven Emperor Concerto and Schumann Fantasie, The Art of Yundi, Chopin Prelude, and Chopin Ballades, Berceuse and Mazurkas.[13]

Returning to Carnegie Hall, Li toured in 2015 with the National Youth Orchestra of the United States, as a featured soloist. After their first concert at Carnegie Hall, the group continued on a seven city tour of China, ending in Hong Kong.

In May 2017, Li attended the opening ceremony of the Yundi Art Museum, located in the Chongqing Huangjueping Piano Museum. It displays several pianos from different stages of Li's career, including his first piano, as well as a collection of his awards, albums and photographs, and a high-tech experience pavilion.[14]

This article uses material from the article Li Yundi from the free encyclopedia Wikipedia and it is licensed under the GNU Free Documentation License.