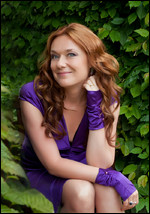 Kožená was born in Brno in Moravia. Both her parents had come originally from Bohemia, to the west. She was born one of the two daughters of a mathematician father and a biologist mother. Her father died when she was eleven.[1] As a child she sang in Kantiléna, the Children's and Youth Choir headed up by Ivan Sedláček and attached to the Brno Philharmonic Orchestra.[2] It was, however, as a professional pianist that she planned to make her career until 1987 when a sports accident at school caused her to suffer a "broken hand": this led her to focus on training for a singing career.[1] From 1987 to 1991 she studied voice at Brno Conservatory with Neva Megová and Jiří Peša, and from 1991 to 1995 she was a student of Eva Blahová at Bratislava Drama College where she graduated in 1995. In 1995, she was a prize winner at the International Mozart Competition. From 1996–97, she was a member of the Vienna Volksoper.

Kožená's first recording was of Bach arias, recorded in the Czech Republic. Upon hearing the recording, Deutsche Grammophon (DG) signed her to a recording contract.[3] Later recordings include Handel’s Roman Motets and Italian Cantatas and Messiah with Marc Minkowski for DG/Archiv, and her first solo recital disc (Dvořák, Janáček and Martinů with Graham Johnson – Gramophone Solo Vocal Award, 2001) for Deutsche Grammophon. Further recordings include recitals of arias of Mozart, Gluck and Mysliveček (with the Prague Philharmonia and Michel Swierczewski), of French arias with the Mahler Chamber Orchestra and Minkowski, Gluck’s Paride ed Elena under Paul McCreesh, a recital disc with Malcolm Martineau and an acclaimed disc of cantatas by members of the Bach family ("Lamento") with Musica Antiqua Köln and Reinhard Goebel. She received the 2004 Gramophone Awards Artist of the Year. For DG/Archiv, she recorded a disc with opera arias of Handel and one with opera arias by Antonio Vivaldi, both with the Venice Baroque Orchestra conducted by Andrea Marcon. She has also recently begun to record for Pentatone, where her first album featured Simon Rattle on piano, in an album of Dvořák, Janáček, Strauss and Chausson.

Kožená appears regularly at the Prague Spring and at the Concentus Moraviae Festivals. She has given recitals in London, the Schubertiade Schwarzenberg, Brussels, Paris, Hamburg, Amsterdam, Munich, Prague, Tokyo, Yokohama and Sapporo, Carnegie Hall, in San Francisco and in London, Brussels, Lisbon, Vienna, Copenhagen, Amsterdam, Hamburg and Prague. She also appeared in concerts with the Monteverdi Choir and English Baroque Soloists Bach Cantata Pilgrimage during the year 2000.

Her operatic engagements have included several notable debuts: at the Théâtre du Châtelet in Paris as Orfeo in Gluck's Orphée, conducted by John Eliot Gardiner; at the Vienna Festival as Nerone in Monteverdi's L'incoronazione di Poppea, conducted by Minkowski; at the Edinburgh Festival as Sesto in Mozart's La clemenza di Tito; at the Leipzig Opera as Mélisande in Debussy's Pelléas et Mélisande, conducted by Minkowski; at the Aix-en-Provence Festival as Cherubino in Mozart's Le nozze di Figaro; at the Dutch National Opera as Cleopatra in Handel's Giulio Cesare; and at the Salzburg Festival as Zerlina in Mozart's Don Giovanni under Nicolaus Harnoncourt. She sang the centenary performance of Pelléas et Mélisande at the Opéra-Comique in Paris under Minkowski and most recently Cleopatra in Giulio Cesare under Minkowski.

Kožená has been married twice. Her first marriage was to the French baritone Vincent le Texier.[5] The marriage ended in divorce after she began a relationship with Sir Simon Rattle. Kožená and Rattle married in 2008 in Brno. The couple have three children, Jonáš (born March 2005), Miloš (born 2008),[6][7] and Anežka, born on 21 June 2014.[8][9]

This article uses material from the article Magdalena Kožená from the free encyclopedia Wikipedia and it is licensed under the GNU Free Documentation License.

Gioachino Rossini Sinfonia di Bologna
Update Required To play the media you will need to either update your browser to a recent version or update your Flash plugin.