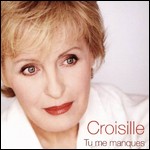 Nicole Croisille (born 9 October 1936 in Neuilly-sur-Seine) is a French singer and actress. She has appeared in 24 films between 1961 and 2005 and recorded albums since 1961. Croisille made an attempt to represent France in the 1974 Eurovision Song Contest with the song "Tu m'avais dit," but was not selected.

This article uses material from the article Nicole Croisille from the free encyclopedia Wikipedia and it is licensed under the GNU Free Documentation License.

Franz Krommer Sinfonie Nr. 7 in g-Moll
Update Required To play the media you will need to either update your browser to a recent version or update your Flash plugin.